Developers 343 Industries tease what’s in store for Halo fans this year with new concept art hinting at the studio’s next big project.

“2014 is here and much is afoot in the Halo universe,” writes former creative director Josh Holmes in a recent HaloWaypoint blog entry. “This past year has been a time of great transition at 343 as we’ve moved our engine and team from Xbox 360 to Xbox One and begun building the next chapter in the Halo saga. We’re proud of what we accomplished with our first release in Halo 4 and now we’re focused on something much more transformative as we make the leap to the next generation of Xbox.”

The post goes on to recap a few of the personnel changes made within the studio over the past year, including the addition of new creative director Tim Longo who worked on games like Tomb Raider, Star Wars: Republic Commando and most recently, the unreleased FPS, Star Wars: First Assault. A few words were also said by former Art Director, Kenneth Scott, who recently left the studio.

To wrap things up, Holmes teased a brand new image of the 343’s upcoming, untitled Halo project, saying, “I will leave you with this image from Sparth – an early exploration of a new location that features prominently in a little game project we’re tinkering with…. ” 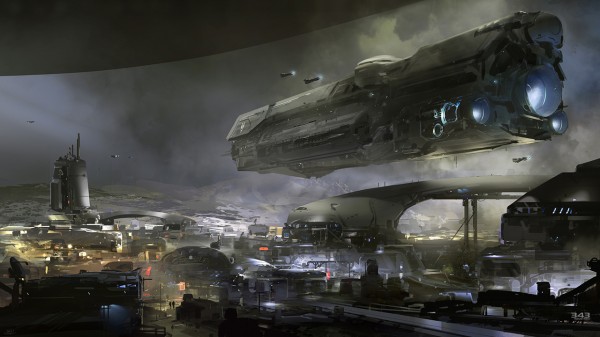 You can download larger desktop wallpaper sizes of the image by visiting the official HaloWaypoint blog.

It was recently reconfirmed by 343 Industries senior PR manager that the next Halo game is still on track for a 2014 release on Xbox One, though it has yet to receive an official title.

Keep your sights on MP1st for more Halo news!

Titanfall is "Built To Be Six On Six", But Supports Nearly 50 Combatants At Once