It appears that Activision is in the midst of selecting participants for a “focus group” through Call of Duty ELITE for an upcoming special event in Los Angeles.

This image reveals an invitation to join a focus group in Los Angeles that will “help improve and shape the future of Call of Duty.” 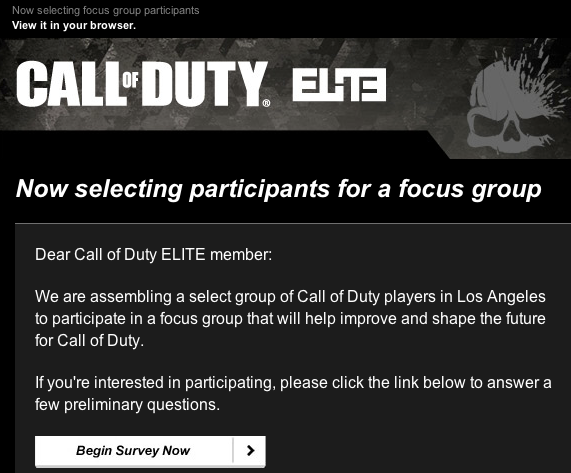 No word as to what the event might pertain to or to which Call of Duty game it relates. While it likely involves Infinity Ward’s upcoming Call of Duty: Ghosts, it could also have something to do with the series’ eSports initiative that gained significant momentum in Call of Duty: Black Ops 2 and during the more recent Call of Duty Championships.

MP1st readers have confirmed to us that the event takes place on either May 20th or May 21st.

We’ll make sure to update with more info once we learn more.

The Reddit user and invitee who originally posted the image wrote, “It seemed to me that it was more so for elite than it was ghost. Either way I’m pretty excited.” He added, “I’ve filled many selective beta surveys. This didn’t give off that vibe.”