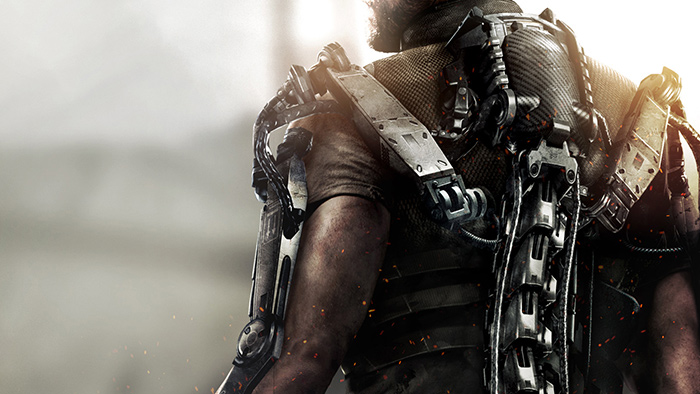 The guys and gals at Sledgehammer Games are keeping tight-lipped about Call of Duty: Advanced Warfare‘s multiplayer and expectedly so as we slowly work through Activision’s rigid clockwork reveal process.

We got our first taste of Advanced Warfare during a single player demo that debuted at Microsoft’s E3 2014 press conference, as well as through a couple of behind-closed-doors events, and while we tried getting some multiplayer details out of studio heads Glen Schofield and Michael Condrey, it looks we’ll have to wait until another day.

They can’t quite talk about it just yet, but the duo sure isn’t short on hints, however. Earlier, Condrey gave up a few small details to known Call of Duty YouTube personality Drift0r, mentioning Exo Skeleton Suits in multiplayer, enhanced player movement, new gadgets, and a key focus on gameplay balance.

Through recent interviews, we’ve also managed to snag a few more bits of info. In particular, both Schofield and Condrey seem to stress all “new” gear or tech and a focus on what sort of implications the Exo suit might introduce to Advanced Warfare’s multiplayer.

“We’ll have our own style. The exoskeletons are definitely in there and that’s the core of the game,” Schofield told Metro.

Condrey went on to explain: “Our multiplayer has what I’m going to call the biggest set of new, as you call it, cool gear that you’ve seen in a long time. It’s a big step forward, from three years in development we’ve been able to innovate across the game. Everything you saw [at E3]… just imagine what that’s going to mean for multiplayer.”

“You’re going to find that new is what it’s all about,” he added.

Meanwhile, Condrey also told Forbes that he hopes the same sort of gadgets highlighted in the E3 demos, like the Exo Suit Overdrive that enhances player reaction and the Mute Charge that deafens anyone in its vicinity, will appear in multiplayer “somehow.”

Logically, not all the gadgets might appear exactly as shown in the single player demos, but it sounds like Sledgehammer will be providing Call of Duty gamers with a list of brand new toys to play with nonetheless, many which not everyone will find familiar.

What sort of abilities or gadgets did you catch in Advanced Warfare single player demo that you’d be interested to see implemented in multiplayer?

Keep your sights on MP1st for more on Call of Duty: Advanced Warfare, launching this November 4.