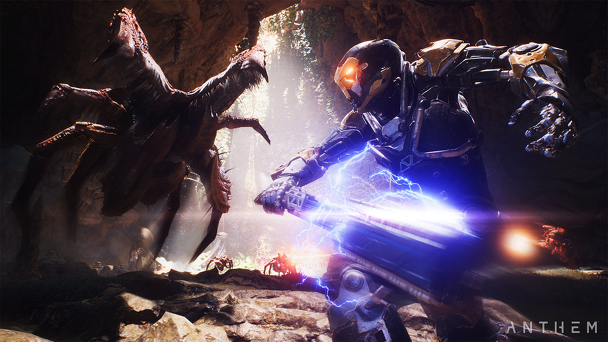 If you’re a fan of Halo’s style of combat, then you might want to keep an eye out for BioWare’s Anthem. It seems the person in charge of combat in Halo, is now at BioWare and is the Combat Lead for Anthem!

Speaking to USGamer at PAX, BioWare Producer Mark Darrah, and Lead Producer Mike Gamble were asked whether the studio had any specialized devs working on Anthem’s combat.

Mark Darrah: Our combat lead worked on Halo and was actually, I think, was a combat lead on Halo. So yeah, we do have we do have pedigree from more action focused studios.

Mike Gamble: But I do have to counter that a little bit because we’ve been building better and better combat experience for like 10 years now. It’s like, you start out with [Mass Effect 1] and then you go on to [Mass Effect 2] and that [action] was tighter. [Mass Effect] Three was even better. [Andromeda] you would argue that Andromeda’s – one of the strong suits was… the jetpack and the combat and how that stuff worked.

This is definitely interesting news,  though it’s hard to see how much influence Halo has with Anthem until we’ve spent some hands-on time with it.

Is this Halo connection a good or bad thing for you? We’re curious to hear what you have to say, so share your thoughts in the comments below.

In other Anthem news, BioWare has said that they think no game has nailed a multiplayer game focused on co-op that also has a great story. Could Anthem be the first one,then? Remember, all story-driven DLC will be free to everyone, which is a good way to not fracture the player base.