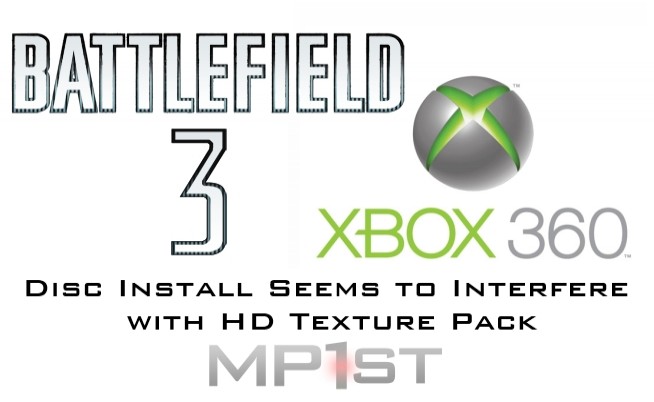 An interesting thread on the Battlelog reports some problems Xbox 360 users are experiencing when having both the HD texture pack and the Battlefield 3 discs installed onto the hard drive at the same time.

User doctor3d has noticed that “If you install the game disc, it will screw up some of the HD textures. No matter which way you do it, first or after installing the HD pack, you lose some of the textures. For whatever reason this game looks MUCH better when you only have the HD pack installed.”

According to this thread, others are experiencing the same problem as well. It seems that the installation of the Battlefield 3 discs to the 360 hard drive interferes with the HD texture pack. “This is caused by your hard drive having to do extra work to produce both the base textures and HD textures simultaneously from the same source. The reason it looks better when the Disc is used instead of being installed is that SD material and game entities stream from disc while HD textures exclusively stream from the hard drive. This increases the bandwidth available to the drive and everything appears on your screen faster, so you don’t have to be near something for as long for it to fully materialize,” explains doctor3d. DICE’s official response so far: “Thanks for reporting this issue, we’ll look into it.”

For now it is suggested that curious 360 users try uninstalling everything from the hard drive and only re-instal the HD texture pack when prompted to upon first inserting the disc.

He’s also ordered the quality of the visuals as follows:

Alternatively, for the best possible quality, it is also possible to first install the HD texture pack to the 360 hard drive and then install both Battlefield 3 discs to a flash or USB drive that is at least as fast or faster than the 360’s DVD player.

Following these steps, we didn’t see much of a difference when it came the loading times or definition of textures on objects in-game; however, character textures were loaded instantaneously. This was especially noticeable when viewing your killer in the killcam. Also, keep in mind that though it may be possible to achieve better performance by following the above steps, keeping the Battlefield 3 discs installed to your hard drive (if you do not have a flash/USB drive) will reduce mechanical noise and general wear-and-tear of your system. If you are satisfied with your current Battlefield 3 experience, we recommend simply playing the game as is. We also recommend you do not take this as hard proof until DICE officially clarifies.

For anyone who has tried these steps, please let us know in the comments if you notice any differences. We will make sure to keep you updated with any further responses from DICE. Make sure to stay tuned to MP1st!

Thanks to Gunny017 for bringing this to our attention.

Some more BF3 news you may have missed: