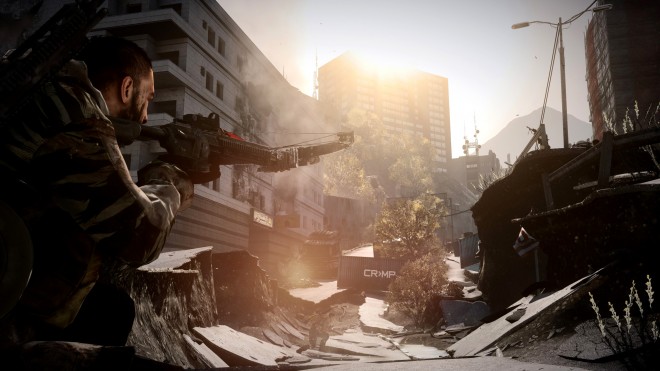 This late November and early December, military-shooter fans around the world will be treated to the latest digital expansion of the world of Battlefield 3.

Battlefield 3: Aftermath will put you in the shoes of a soldier who must fight for survival in a war-torn, post-earthquake environment. Bloodied and bruised, you’ll have to make the most of what’s left in the wake of destruction by scavenging every corner of your surrounding area to find better gear, utilizing makeshift military vehicles damaged in the quake, and carefully traversing the warped and uneven environment. Judging by our earlier preview, Aftermath is set to provide fresh new experience on the Battlefield.

MP1st: Aftermath takes place in a very specific setting – in the aftermath of an earthquake that has taken place in Tehran in the middle of a battle between American and Russian forces. How exactly will this setting that DICE has chosen for their latest DLC affect the gameplay?

Mcleod: So it affects [the gameplay] in a number of ways. First and foremost, it actually affects our characters, our vehicles and our weapons. A lot of the new stuff we’re bringing in is born out of this post-earthquake aftermath. So, what you’ll notice is that the characters are a bit more bloodied – they’re a bit more wounded. We’ve done a complete re-skin of this which is the first time we’ve ever done this for battlefield 3. On our vehicles – they’re all heavily modified. The reason for this is because they were caught in the earthquake as well. So, the military engineers have had to salvage what they can, build them back together, weld on some stuff, and also, in true Battlefield style, they’ve added some extra firepower at the same time. So the Phoenix and the Barsuk, which are the two new vehicles for each specific side, they both have have two gunner positions now. So, you have the heavy machine gun and the grenade launcher.

But, regarding the environments themselves, it’s very unique to start in such a war-torn environment theme. It really is a post-earthquake environment. There’s a lot of cracks in the roads, places for you to hide, it creates a lot of elevation [thanks to] toppled buildings, which isn’t always present in the older maps.

MP1st: DICE is introducing a brand new and very interesting weapon to the Battlefield – the Crossbow. Tell us more about it!

Mcleod: The Crossbow’s our new weapon and it’s unique in two very specific ways. The first one is it’s not acting as a primary weapon. It’s acting as a gadget. So, this means no matter what class you want to play as, or what your play style is, you can use the Crossbow. There’s two versions of it. One is a red-dot sight and the other one is an 8X rifle scope. So, if you like to get up close and personal, you can do that. If you want to keep your distance, you can do that too. The other great thing is it has such a variety of gameplay. This comes in the form of the four bolts that you can equip it with. So we have a standard bolt – it’s very much your bread and butter. It’s mid range, it’s mid-damage. You also have a scan-bolt which you can fire to a certain location and it acts as a proximity detector to show up enemies. You have a high-explosive bolt which is great for vehicles and you also have the balanced-bolt, which is good for those long range shots.

MP1st: Scavenger brings a new twist to Conquest Domination. Where did the inspiration for this new game mode come from?

Mcleod: So, Scavenger is born out of the post-earthquake theme. You’ve been trapped. You got caught in in this environment. You have to find whatever you can to survive. You’re almost left with nothing. So, as you start with Scavenger, you start with one pistol, one grenade and one specialization, so the class here doesn’t matter. And then, as you go along, you need to explore the map to its fullest to actually pick up or scavenge weapons. You’ll find that there’s three different levels of weapons. Your less effective SMG’s, which are a bit weaker, you’ll find in safer areas, maybe around the outside of the map or in enclosed areas. To get the real heavy weapons like the assault rifles and carbines, you need to go into the most dangerous areas. You’ll need to go around the flags or into open, level places and this really creates a risk-vs-reward gameplay.

MP1st: What type of assignments can players look forward in this DLC?

We do have 10 new assignments which are coming in. Five are specifically tied to the crossbow itself – to actually unlocking the crossbow for your use – and then four for the individual bolts. Some are tied to the vehicles as well.

MP1st: What was your goal with Aftermath? Did you purposely want to bring in elements from the single player campaign into the multiplayer?

Mcleod: So, we had two main trains of thought with this. The first one is to do with the actual size of the maps that you play on, the environment and the type of infantry-vs-vehicle gameplay. Close Quarters was very infantry-focused, Armored Kill was very vehicle-focused and we really wanted to mix it up. The other thing that we wanted to do is that we did want to tie it back to the single player campaign. We wanted our player who played the single player campaign – who got caught up in the emotion of the Tehran earthquake – to be able to really take that story further.

What do you think about the setting that Aftermath takes place in? Do you prefer this theme-based approach to Battlefield 3 DLC? Let’s hear your thoughts below!

MP Talk – Battle of the Shooters