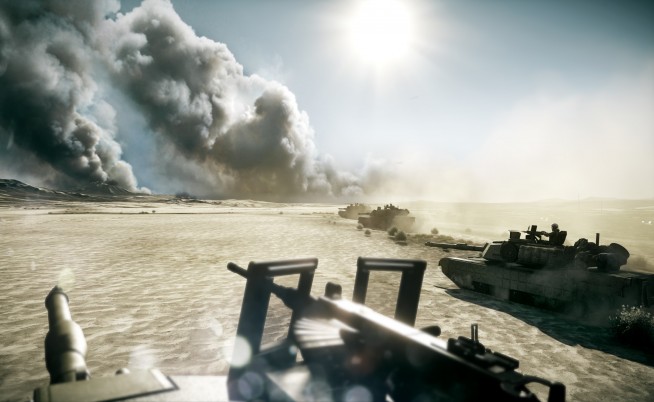 Over at the Battlefield 3 UK forums, DICE Senior Designer Gustav Halling was kind enough to answer a number of questions regarding both Battlefield 3 and the future, vehicle heavy DLC, Armored Kill. Here, he spoke of upcoming changes to the Commo Rose, unlocks, assignments and everyone’s favorite topic, map sizes.

First on the cutting block was the topic of the Commo Rose, an important feature of the PC version of Battlefield 3. Obviously, DICE has been working to improve the Commo Rose since launch, something made apparent by the recent images found in the recently released patch notes. Halling revealed that “the final goal is to make it closer to the BF2/2142 one.” He also made it clear that there “no plans to add it on consoles where other automated systems are in place.”

Speaking of unlocks. Halling stated that DICE will not be adding (or removing) vehicle unlocks in the future, although this is contrary to what Senior Designer Alan Kertz recently hinted at regarding vehicle unlocks. “Its a really important gameplay balance between choosing if you want to be an aggressive tanker against infantry or against vehicles. Selecting coax etc.,” mentioned Halling.

Fans worried about having to unbearably trudge through another number of squad deathmatches in order to complete an assignment in future DLC need have no worries. Halling agrees with many fans, stating, “I do agree on that the squad deathmatch [assignment in B2K] wasn’t the best one and I will make sure we do not add ‘win x times’ to such a specialized game mode to it again.”

Halling also mentioned that the artillery system being used in Armored Kill is still a work in progress and couldn’t say how it would end up. He did aks for suggestions, however, keeping these three guidelines in mind: “Needs to be fully effective without help from others. How would the aiming screen look like? camera / minimap? How would team mates be able to help?”

Lastly: Map sizes. By now, most everyone has heard that Armored Kill will feature “the best vehicle experience” and will boast the largest map in BF history. To get a better picture of what the maps might generally look and feel like, Halling mentioned, “I would compare them against Fusshe Pass, Dragon valley and Wetlands,” for those who are familiar with those maps. He also clarified that “flags will also be less clustered in general in AK, giving more room for vehicles but at the same time we can’t forget about infantry also.” He admits that “it’s a hard balance that we are working on all the time.” Halling truly believes “that the maps AK delivers will offer 4 different styles from the biggest most spread out flags and size to the more normal size more comparable to caspian border.”

Is that enough to get your mouth watering? If it was’t, Halling also told the UK forums, “many of the questions I know people been asking and wants include things I can’t answer yet, but it may come as a surprise the coming weeks.” Also, “PS3 players will probably notice some of the things that aren’t in the patch notes on tuesday.”

What are your reactions to these new bits of info? Are you excited for Armored Kill? Leave your thoughts in the comments below!