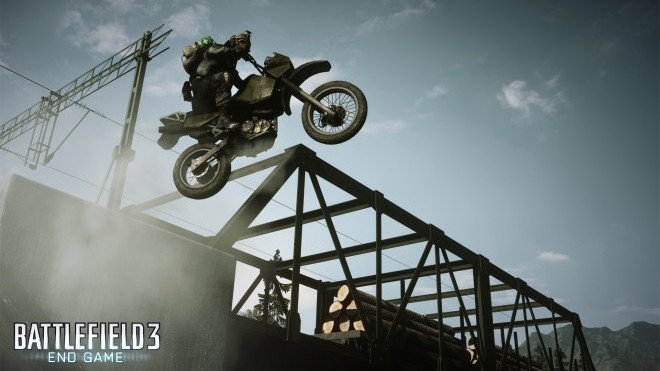 From the original Battlefield 1942, DICE is bringing back a staple game mode featured in almost all first-person shooters: Capture the Flag.

Producer Craig Mcloed explains the significance of brining back such a classic game mode, especially at this particular time.

“That’s one of the really cool things when I think about bringing capture the flag in,” he told MP1st during a recent EA preview event. “Apart from it just being a core first-person shooter mode, we just celebrated our 10 year anniversary. And, actually, the last time and only time that we had Capture the Flag in was in the original 1942. So that was really cool. But the main reason we picked it, it just rounds it off. As a franchise, not just a BF3 franchise, but a whole Battlefield franchise, these two modes, bringing them back into the family, so to speak, really really helps.”

Only, this time, DICE is introducing their own take on the mode with the inclusion of the new motor-bike, a real game changer. In End Game, it’s one of the few ways you can get yourself to the enemy flag quickly and return it to home base with speed and agility. Of course, you’re not as heavily armored, leaving the driver vulnerable to small arms fire, or… RPG’s.

I recalled to Mcleod a particularly epic moment I was fortunate enough to witness during my short time with End Game. A soldier playing dare devil who decided to take his bike up a ramp and over the river that runs through Operation Riverside was struck mid-air by an enemy RPG, creating a spectacular display of fireworks celebrating a rather lucky shot.

Mcleod recalled his own unfortunate moment with the motor-bike: “I got ran over in the top floor of a building because someone jumped a bike through the window. So, I’m sitting up here. It’s close to a flag point and I just capture the flag and I’m kind of protecting it, waiting for back up. I know that, short of someone blowing through the wall, there’s only one way into this room, and I’m feeling pretty comfortable. Then, yeah. A dirt-bike flies off a ledge, in through the window, and runs me over. I’m like, ‘there you go. What can you do?'”

In the same breath, DICE is also re-introducing Battlefield 1943’s Air Superiority, a game mode that pits two teams of jet fighters against each other in total aerial combat for control over the skies.

Similarly, Tank Superiority introduced in Battlefield 3: Armored Kill was based almost entirely on tank-vs-tank combat, though infantry was allowed to get into the mix, using Javelin or RPG rockets and other equipment to aid in the fight.

I asked Mcleod if DICE ever planned on allowing infantry to play a role in End Game’s Air Superiority.

“It was always strictly going to be the jets,” he answered. “We wanted to focus on the jets. Obviously, this is the flip side to Tank Superiority where we wanted to give it to our pilots, but by having people on the ground, it just would have taken too much away from that. We didnt wan’t people hiding and trying to take people down with Stinger rockets.”

Hopefully, that should allow players to focus on the task at hand: fighting for control of three different points, represented by gigantic floating blimps. More humorously, I asked Mcleod how DICE landed on the idea of using blimps to represent the different capture points.

“We actually had a number of ideas as to what we could use. Initially, we didn’t have a focal point, but then we felt that it was too loose. We needed to pull people together. Then, it was a case of, ‘well, we can’t put flags in there. We can’t put anything on the ground because it won’t be noticed enough.’ Blimps – it kind of works when you think that It’s big enough for people to see, it makes sense for something that would sit in the air as well, so you wouldn’t expect it to travel. So, yeah. It was an inspired decision by somebody.”

Also, let us know in the comment what mode has you more excited. Capture the Flag or Air Superiority?