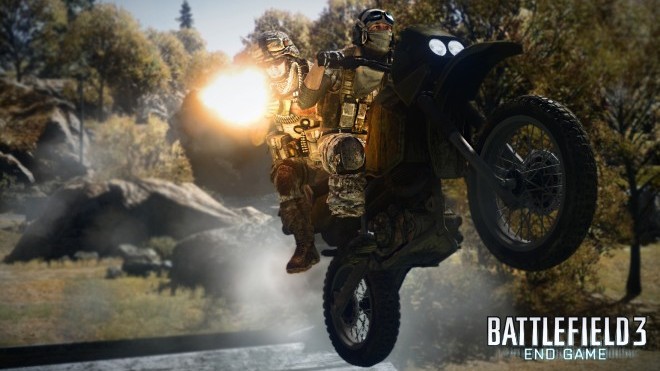 Battlefield 3 Premium members on the PlayStation 3 now have the chance to download and play End Game, the fifth and final expansion coming from Battlefield 3 Developers DICE.

End Game introduces four new maps based on each of the four seasons, along with two exciting new game modes: Capture the Flag and Air Superiority. Take a spin on the new dirt-bike and in the new AA vehicles and go for a ride in the new Dropship. Don’t forget a bout a ton of new dog tags and assignments you can achieve as well.

While you get on top of that, take a moment to catch this beautiful End Game launch trailer below:

PS3 and PC players can also look forward to a brand new server update which fixes and tweaks a number of items that deploys today along with the DLC. (DLC for PS3 Premium members only.) The exact same update is expected to go live for Xbox 360 users no later than March 21.

“We added some additional rcon commands for players renting a server on PC. For documentation on these, please reach out to your server provider.”

How to download the March update on your platform

PlayStation 3: When you start the game, you will be prompted that there is an update available. To continue, you must accept the update, which will install automatically.”

PS3 Premium members, how are you enjoying Battlefield 3: End Game so far?