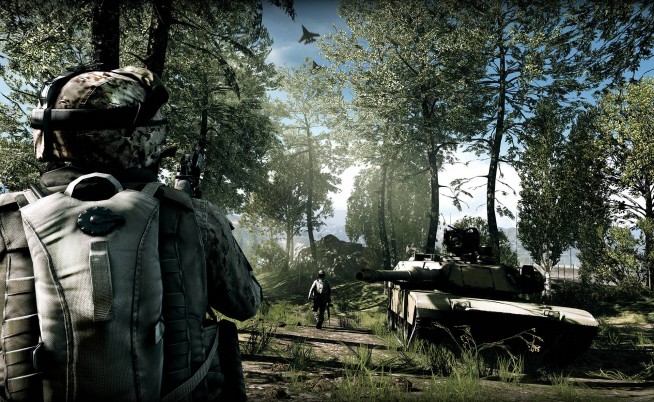 A lot of new information about Battlefield 3 has come out today, including the minimum and recommended system specifications for the PC beta. These are the requirements for the beta so they might still change a bit, but don’t expect miracles. This late into the development cycle they probably won’t make drastic changes anymore. Enough disclaimers, let’s get down to the numbers:

The first thing that’s obvious is something we’ve known for a while now. Windows XP will not be supported at all. The game requires at least a DirectX10 compatible graphics card and an operating system that also supports DirectX10 (Windows Vista or Windows 7). The minimum specs are pretty mild. The HD3870 and 8800GT are very old cards released in late 2007. Combined with the 2GB RAM and the dual core CPU pretty much every system sold in the past 3 years with a dedicated graphics card should be able to run this on at least minimum settings.

The recommended specifications are more striking. A quad-core CPU and 4GB of RAM isn’t that special, but the recommended graphics cards are in the mid to high-end part of the very last generation of graphics cards. It’s also pretty odd that they compare the GTX560 with the HD6950. The HD6950 is almost 100$ more expensive and is quite faster in most games. price and performance wise the HD6870 is on par with the GTX560. Does this mean the engine might run better on Nvidia setups? Either way these are some pretty impressive specifications. Let’s hope the engine also scales down to the lower end well so even people with an older or less powerful machine can play this with decent graphics.

If you still have questions, please leave a comment below and/or head on over to the official beta page.

Make sure to follow @MPFirst on Twitter for all your Battlefield desires and also to get some gaming sessions going with MP1st’s readers and editors once the beta is up!