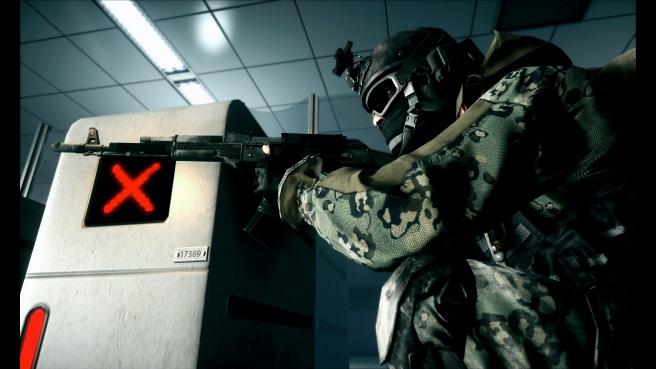 Do we have juicy new information on Battlefield 3? I think so.

Around 12:30am EST early Friday morning, Gustav Halling, gameplay designer at DICE, tweeted out a response to a concern regarding not being able to spawn on teammates when not in a squad in Battlefield: Bad Company 2. For the most part, it’s fairly easy to get in a squad when entering a game, but there is the odd time when, say, two squads of four are already in play and if you are the ninth person to enter the game, it’s not always possible to enter any of the already full squads. Of course, when you are playing solo, you have no option but to always spawn back at your base. Some people prefer to play by themselves, but it can be frustrating to constantly have to walk/run/drive across the whole map to get back to the action after you die. A while back, DICE did say they wanted to make Battlefield 3 more forgiving for people who prefer to play solo, without a squad, but never said exactly how they were going to do that. As of now, I think we have a clue.

“…play as recon and put out a radio beacon to spawn on 🙂 Free choice for everyone!”

To me, this “radio beacon” sounds a lot like the tactical insertion equipment found in the Call of Duty series or the spawn beacon featured in Battlefield 2142. “Free choice for everyone!” This implies that perhaps your entire team can spawn on your radio beacon. Personally, this eases one concern that I had with the ‘squad leader’ role. DICE announced that squad mates could only spawn on the squad leader, but what if this leader is a terrible player and is constantly dying? Why should the entire squad be punished for the actions of one inexperienced player? I would call this “radio beacon” function a welcome feature to Battlefield 3, but those are just my thoughts. Let everyone know what you think in the comment section below!