Ever wonder why Battlefield 3 looks so good for a first-person shooter that not only features some of the biggest playable battlefields on the PC, Xbox 360 and PlayStation 3, but also 64 player battles with destruction, vehicles, and a ton of weapons?

You have the Frostbite team thank for that, a portion of the DICE development studio dedicated to building and optimizing the game engine that runs the Battlefield games you love, as well as other past titles like Medal of Honor: Warfighter and upcoming titles from the Need for Speed, Dragon Age, and Mass Effect series. The same tech will also be powering the upcoming Star Wars games from DICE.

During Battlefield 4’s announcement, executive producer Patrick Bach mentioned that, with Frostbite 3, the team hopes to create a Battlefield experience that is “human, dramatic and believable.” He said that with the power of the new engine, “nothing is holding us back” and that there are “no excuses.” 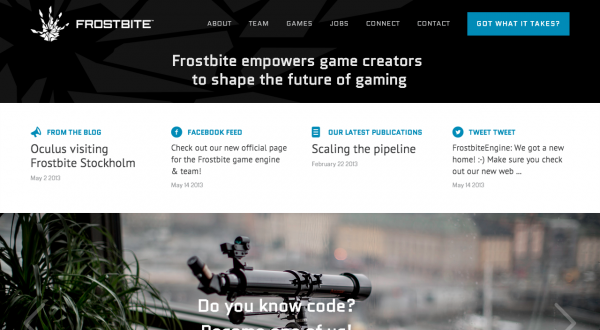 Check it out for yourself here.

So, what has been your favorite Frostbite-powered game so far?

Battlefield 4, powered by Frostbite 3, launches on current- and next-gen consoles as well as the PC this fall.