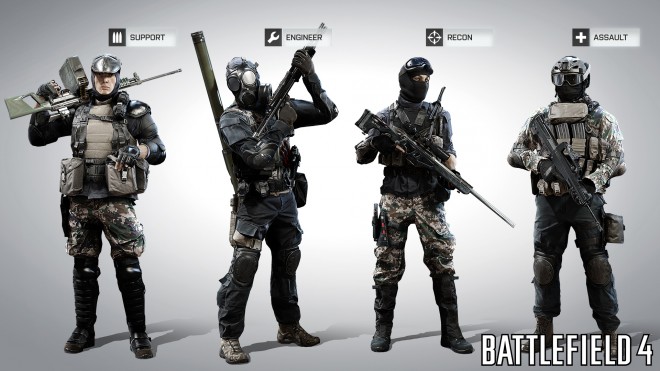 Battlefield 4 developers DICE have released a ton of multiplayer info about the game today, showing off the new look of Battlefield 4’s factions and classes, as well as detailing each class, improvements to gadgets, tweaks to suppression and how field upgrades work.

Let’s start by taking a look at the three factions being introduced in Battlefield 4; China, Russia, and the US. Over on the latest Battlefield Blog, the studio posted these high-resolution character renders of each class from each faction. Check them out! 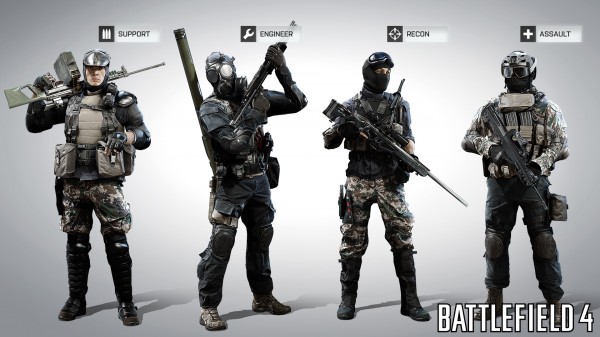 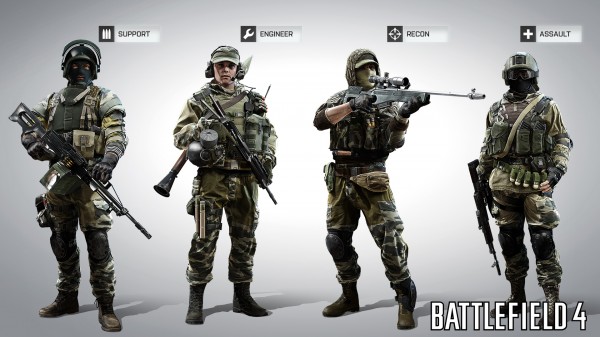 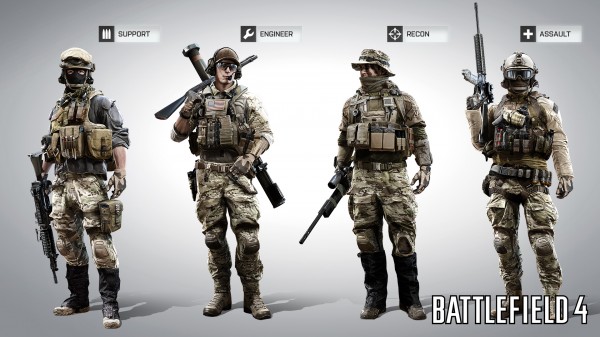 Developors also went in-depth with each class, describing some of the changes made to the Engineer, Support, Recon and Assault since Battlefield 3.

This time around the Engineer has a lot more variation in anti-vehicle weapons. We’ve also revamped the way we do vehicle disables and guided weapon systems to give the Engineer a broader set of tactics at his disposal. This includes everything from high damage weapons that may be more challenging to use (like RPG-7V2) to fire-and-forget smart weapons with low damage (like the MBT LAW), and the fan favorite Wire Guided Engineer Missile (the FGM-172 SRAW) that you might recognize from Battlefield 2.

The Support kit has a few more offensive options, and thanks to community feedback will retain his C4 and Claymores from Battlefield 3. The XM25 gives him some nice indirect suppressive fire, a redesigned remote mortar allows him to use indirect fire from a distance, and the ability to equip carbines and DMRs gives him an added versatility in combat roles.

Recon has gotten a much needed boost to mobility, as well as the return of the Spec Ops play style from Battlefield 2. Pack a carbine, C4 (or Claymores), and Motion Sensors and you’re good to go behind enemy lines. Fans of more traditional sniping roles will enjoy our revamped sniping mechanics with rebalanced Sniper Rifles, the ability to zero your sights (set an aiming distance), and additional optics and accessories. Finally, the Recon players can still utilize the MAV, T-UGS, and Radio Beacon to help out their team.

Assault is still the frontline run-and-gun kit that also serves the role of combat medic. This was one of the major changes in Battlefield 3 compared to Battlefield 2, and one that players have really appreciated. Assault is still the go-to kit with med kits and defibrillators but has picked up some additional mobility with the First Aid Pack, which heals a single soldier over time, or the 40mm Flash Bang rounds to help clear rooms.

DICE also mentioned in the blog that Kits, Gadgets and Specializations will now help squads to remain more mobile, as opposed to having to remain stationary to operate a gadget, for example.

Some new gadgets include:

Suppression has always been a big point of contention since Battlefield 3. Here’s how DICE is tweaking it for Battlefield 4.

We’re increasing the suppression effect of Light Machine Guns, exclusive to the Support kit, while other weapons are less suppressive. Additionally, we’ve decreased suppression at close range to ensure that close quarters battles always focus sharply on player skill. Besides changing the visual effects of suppression, we’re also replacing the accuracy penalty in Battlefield 3 with a scope sway effect – similar to what snipers get in Battlefield 3 while suppressed. A skilled, focused player can keep his aim on target and get hits, even while under the effects of Suppression.

Field upgrades are being re-introduced to the series, but with a bit of an overhaul. DICE explains how they will be integrated into the gameplay.

Each of the playable kits: Engineer, Recon, Assault, and Support, have four upgrade careers to choose between. Two of these are global and usable for any kit – one of them focusing on Offense and one on Defense. Offense starts with SPRINT and goes through AMMO, MORE GRENADES, and REDUCED FALL. These give you quicker sprint speed, more available ammo magazines, one extra hand grenade, and allows you to fall from greater heights without taking any damage, respectively. This universal upgrade path is great for players who enjoy being at the front lines and leading the charge.

Meanwhile, the Defense path will net you ARMOR, COVER, FLAK, and QUICK REGEN. These grant you increased protection from shots to the chest, a decreased rate of being suppressed, decreased damage from explosions, and a shorter time span before the out-of-combat health regeneration kicks in. If you are more defensive-minded, perhaps playing as Support from the sidelines, this can be an excellent choice.

Besides the two universal Offense and Defense Field Upgrade careers, you will also be able to choose between two upgrade paths that are unique to your class and allow an increased specialization in specific combat roles. So while the Assault kit has the unique Combat Medic and Grenadier upgrade paths, Engineer can choose between specializing in the roles of either a Mechanic or Anti-Tank soldier. The first of these is all about repairing your own vehicles, while the latter deals with taking out enemy armor.

Lastly, DICE wants you to vote on a third upgrade path that they are putting up to a poll on the latest blog. The winning selection will actually make it into Battlefield 4 multiplayer, so you’ll definitely want to choose wisely. We’ll leave the description of each below, but be sure to visit the blog right here to cast your vote

This is the career for players who want to wreak havoc at the frontlines. Built to promote offensive play and gung-ho attitude, you’ll need all the extra AMMO you can get. ARMOR gives you that increased protection that means you could walk away from chance encounters at zero range when rounding a corner, while an added GRENADE lets you clear out enemy camps more freely. Lastly, that extra SUPPRESSION boost comes in handy when you find out you’ve run into a hornet’s nest.

Fortune favors the brave. Or in the case of the “SURVIVOR” career, fortune favors players who have bolstered their survival capabilities by picking the right specializations. REDUCED FALL means you can jump off rooftops when enemies are blasting RPG into your building, while extra AMMO always helps when trying to shoot yourself out of a pinch. QUICK REGEN means you only need a short period of time before your soldier starts to auto heal, while COVER effectively means enemy suppression will not have as much effect on your ability to return fire with accuracy.

Inspired by the fabled shadow warriors of the Orient, the “SHADOW” career grants you the mystical powers you need to infiltrate enemy territory without being seen. Okay, not really, but it grants you some perks that accumulated will give you an edge when going behind enemy lines. QUICK UNSPOT means you’ll disappear more quickly from enemy radars when you’ve been spotted, while SPRINT lets you move quickly from cover to cover. REDUCED FALL lets you jump from your favorite hiding places without taking damage, while STEALTH grants you the ability to remain undetected when passing within range of enemy motion sensors.

So you want to be a big game hunter? ADVANCED SPOT grants you the ability to have targets spotted for extended periods of time – they can run, but they can’t hide. While they’re cowering behind cover thinking that they’ve escaped detection, SPRINT up to them and use your extra AMMO and GRENADE to flush them out! Sometimes, playing Battlefield is almost too easy.

Which one are you voting for?

Also, let us know in the comments what new tweaks to Battlefield 4 multiplayer have you most excited!

Details Emerge on PC-Exclusive Legacy of Kain: Nosgoth, May Come to Other Platforms