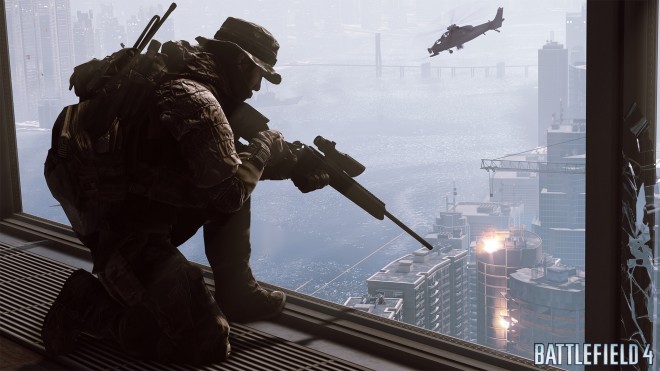 If you’ve been following the latest Battlefield 4 news, you’ll know that multiplayer is returning in a big way this October 29.

Not only are developers DICE going to let you bring an entire skyscraper crashing to the ground, but the team has spent a lot of time polishing the “second-to-second” experience, as DICE General Manager and Vice President likes to put it, talking about the smaller innovations that are being introduced to the multiplayer.

We covered a lot of the new additions here in our first impressions of Battlefield 4 multiplayer, but there still are a few goodies that were left unexplained.

Luckily, we recently had the chance to pick Troedsson’s brain about some of the more mysterious aspects of Battlefield 4’s multiplayer.

For instance, some of you may have noticed a small green bar that fills up next to the mini-map in Battlefield 4’s heads-up-display as you perform certain actions while in game. I asked Troedsson what it’s all about – what does it do, and how does one fill it up?

“Well, that’s a concept that we call ‘Field Upgrades,'” he said, “Long-lasting fans might recognize part of this concept from 2142.”

“Basically, it’s a non-persistant upgrade system that goes for you and your squad, meaning that if you play together and you have team scoring events, you will upgrade in various tiers on this Field Upgrade list. You will unlock things like more ammo, more grenades, and various boosts that can help you and your squad.”

There are, however, a couple of twists. Troedsson added, “…if your squad, for instance, is wiped out, you will fall down a tier, and it’s also, as I mentioned, not persistant, so this will just be per-session, and then you have to restart. We put this in there because we really wanted people to play – be recognized for playing even more together.”

He also mentioned that “This then replaces the old specialization system that we had.”

If you watched the latest Battlefield 4 multiplayer trailer, you’ll notice that, near the very end, a soldier manages to reverse a takedown technique initiated by the enemy, resulting in his foe’s demise, instead of his own. I asked Troedsson how exactly this will work in-game.

“This isn’t entirely done, but as it currently stands, if somebody comes up to you and you actually have the opportunity to see them – so there’s an element that you can actually sneak up behind somebody and they can’t counter you, as it is now,” he explained. “But basically, if somebody melees you, and you melee them back with the right timing, you are actually the winner instead.”

Humorously, he added, “We know how interested people are in taking other people’s dog tags, especially ours. They keep hunting us all over the internet. Very frustrating. Thank you, players. So actually, we implemented the feature just for our own sake [laughs].”

“No we didn’t. But currently, it’s not like it turns into a sword fight. You can counter once and if you miss, then you miss, and if you manage to do it, then you manage. It’s something I think we’re going to need to test a bit and see how it works out, but it’s definitely a feature we’re excited about.”

I then asked about any other new additions Troedsson could think of.

“There’s so many new things under the hood in that second-to-second experience that I think a lot of people will like,” he said.” I tried to remember all of it but I can’t. Small things like we’re really revamping the entire suppression system. So, in close quarters fights, we actually don’t have that much suppression and suppression is actually toned down on a lot of the weapons. It’s more the LMG’s role to actually be the suppressor. Things like making carbines and DMRs for all the kits. So, we’re doing some changes there with the kits.”

“We have an additional feature now which is zoom-peek. So if you’re behind cover and you zoom your weapon, you automatically lean over the cover. We’re not entirely done with it just yet, but, actually, it’s testable on the floor if you want to try it out. We’re not done with it but I think that’s going to be pretty cool.”

If you’re excited to learn more about Battlefield 4 multiplayer, be sure to stick around as we’ll soon be posting our full interview with Karl-Magnus Troedsson right here on MP1st.