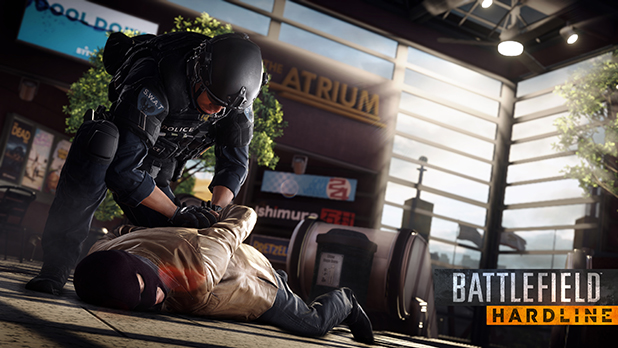 Visceral Games VP and GM Steve Papoutsis is sharing a ton of details on the studio’s follow up to DICE’s Battlefield 4 with details on weapons and classes in Battlefield Hardline.

Taking in questions from fans, Papoutsis talked about Hardline’s character models and classes, explaining that a lot of what we saw in the first beta is still a work-in-progress. He also reveals a few yet-to-be-seen weapons that will be available in Hardline, including the MP5 sub-machine gune and the M1911 hand gun. He also gives us a rough estimate of the amount of weapons that will be in the game.

Check out the questions and answers below:

@DeadSyncPS4: Loadouts are a BIG part of BF. Any plans to include loadout presets with in-game integration (not just Battlelog)?

Papoutsis: We are making some tweaks to classes based on feedback from the beta. Balancing, renaming, this will continue up to launch.

@deadside00: Will the character models for the classes be changed? Criminal models are kinda generic/lame

Papoutsis: Yes, we’re going to be changing and improving the models (and everything else as we final the game)

@fretz07: how many weapons will you be able to use per class?

Papoutsis: Around 12 weapons per class.

@KHodgDog: I didn’t get to play the beta (I’m on xbox). What snipers are in the game besides the R700(think that’s what it is)

Papoutsis: We have 3 other bolt actions and 4-semi auto sniper rifles.

@ntsmusic9: Will the MP5 be in the game? Will there be a dino mode?

Papoutsis: Yes, the MP5 is in the game… and you’ll just have to wait and see

@ZengarenTaloven: Do you plan to just include conventional weapons that already exist or will the criminals use improvised weapons?

Good answers so far. Also be sure to read up on what Papoutsis had to say about Hardline’s maps and game modes right here. No details were shared on Hardline’s Premium service, but Papoutsis assured readers that we willl “hear more soon.”

Keep your sights on MP1st for more on Battlefield Hardline.

New Mortal Kombat X Character To Be Revealed During Injustice Finals At Evo 2014, Hints Point to Fujin or Raiden