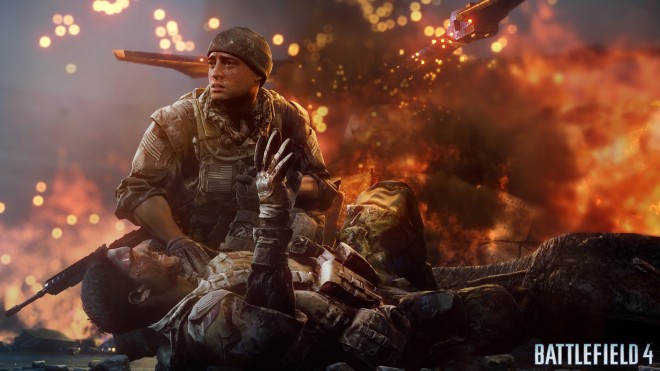 EA’s and DICE’s recent reveal of Battlefield 4 left many fans wanting more of this Fall’s next big FPS blockbuster.

‘But where is the multiplayer?’ asked millions of avid Battlefield fans.

Though it may not seem like it, Bach is sure that “there are a lot of people who are really happy we are building the single-player. They don’t even dare to say it out loud, because all their friends will mock them. But Battlefield is no longer a multiplayer-only game.”

With these statements in mind, we recently had the chance to speak to lead core gameplay designer on Battlefield 4, Allen Curts, where we asked if this shift in philosophy would, in any way, effect the multiplayer experience of Battlefield 4.

‘Absolutely,’ said Curts. ‘FPS games these days aren’t just about mindlessly shooting random people on the other side of the world. They’re about story, emotion, and feeling an attachment to the sorts of things these soldiers in the single player campaign go through.’

‘That means that, yes, we will be shifting focus to Battlefield 4’s single player experience over the period of development leading up to release.’

We asked what exactly that meant for the multiplayer. ‘Well, for one, we’ll simply be limiting the amount of content, like game modes and maps, for example,’ Curts responded.

‘We’re going to stick to the more popular modes like Team Deathmatch and only include roughly four small- to medium-sized maps. Battlefield 3’s telementary data has shown TDM to be the most popular game mode on only a select few maps like Operation Metro, for example. So, we asked ourselves ‘why give Battlefield fans more of what they don’t want? Let’s give them more TDM on maps like Op Metro.’ This will also allow us to put more of our resources towards the single player campaign.’

We then asked if the team thought this might upset any Battlefield fans. ‘No way,’ said Curts, confidently. ‘Our true, core Battlefield fans want more single player, so that’s what we’re giving them.’