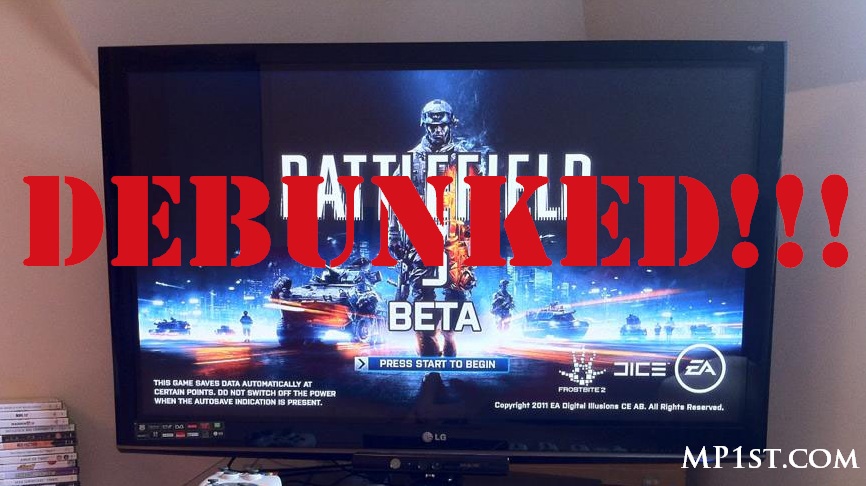 Noticed any Battlefield 3 beta rumours as of late? The latest one will have you thinking that the Beta comes out in the next few days and that there is picture proof of it.

This picture circling the internet supposedly show’s the title screen of the Battlefield 3 beta on the Xbox 360. While the screen itself could indeed be real, the date of the beta has been debunked by none other than Daniel Matros himself, community manager at DICE. When asked on his Twitter account if rumours were true that a developer at DICE took the picture and whether or not the beta dates were real, Matros simply replied, “No.“

In other news, Battlefield 3 has officially been rated.

In the latest BF3 ‘Guillotine Gameplay Trailer,’ which you can view by clicking on the featured picture, you can notice the game’s ESRB rating in the first few frames.

Battlefield 3 has received, as expected, a Mature rating for Blood, Intense Violence, and Strong Language. It’s worth noting that Battlefield Bad Company 2 got an M rating as well.

Update: We’ve contacted our friend, Mr. Matros, for further clarification on the picture itself.

Update 2: Daniel Matros has officially confirmed the picture to be real. “It´s a testing picture. He´s from EA, of course he tests stuff,” Matros said on his Twitter account, referring to the EA employee  who took the picture.

Make sure to follow @MPFirst on Twitter and check out some of our latest stories on Battlefield 3:

BF3 – Day/Night Cycles in MP? All Gametypes on All Maps and More Responsive Controls