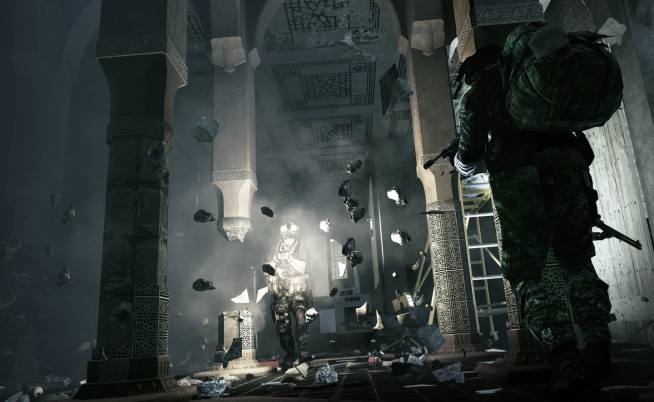 Senior VFX Artist at DICE Nadab Göksu gives Battlefield 3 fans a sneak peak at the type of work that went into creating the beautiful HD destruction that will be causing quite the mess in the upcoming Close Quarters DLC. To see some of it in action, make sure to check out the latest “Donya Fortress” gameplay trailer from DICE.

Having worked with DICE since the Battlefield 2 in 2005, Nadab Göksu explains in the latest issue of Inside DICE his roles which include “everything from creating particle effects to post filters, lens flares, and bullet decals.” He also makes sure to “hook stuff up to the right gameplay effect — so there’s a metal kind of explosion (and not a wooden one) when you fire your RPG at a vehicle, for example.”

Having worked extensively on the upcoming Close Quarters DLC, Göksu details his focus on bringing intense, HD destruction to the forefront of this particular battlefield, but without the potential distractions that could hinder Battlefield 3’s gameplay. Göksu explains that “particle effects should not block a player’s view. We have a lot more destruction than in previous games, so if we were to use the set of FX from the base game, the rooms and corridors in Close Quarters would be literally filled with smoke for long periods of time, potentially ruining the gameplay.” He adds that “the focus here should be on debris rather than smoke,” and that this can be achieved by “having a lot of debris and very violent dust explosions that burst and dissipate quickly so that they don’t take over the scene.”

Battlefield 3 fans can also expect highly detailed environments with a lot going on in the background. Göksu lists as few examples seen on the map “Skybar,” DICE’s internal title for Ziba Tower (check out the trailer here): “you have the sprinklers that will trigger if someone shoots at them or if an explosion goes off nearby. We also have gas stoves that burst into flames during the entire round. Showers start to leak water and steam, TV’s are buzzing with static, lights are flashing, and so on.” These “chaotic elements” are sure to add to the fast-paced and action-packed feel of close quarter combat, giving players that extra sense of immersion.

Göksu stresses that with the amount of destruction and chaos going on, “put simply, at the end of a round, a Close Quarters map should look and feel completely different from when the round started.” That is, if you’re doing it right.

He also stated that fans can expect much better impact effects from bullets in Close Quartes thanks to some new optimization techniques. This also applies to destruction effects which will now react differently to different types of materials such as wood, furniture, concrete, marble and so on. RPG explosions have also been made to look unique in order to be differentiated more easily from grenade explosions (which have also seen some tweaks in Close Quarters). Additionally, the C4 explosion radius has also been adjusted as has the Claymore to better suit the smaller, compact map design of Close Quarters.

Below is a demo montage demonstrating the chaotic effects of randomly shooting stuff in Close Quarters:

Are you looking forward to some close quarters battles and HD destruction?

Make sure to check out the Close Quarters weapon list if you haven’t yet already!