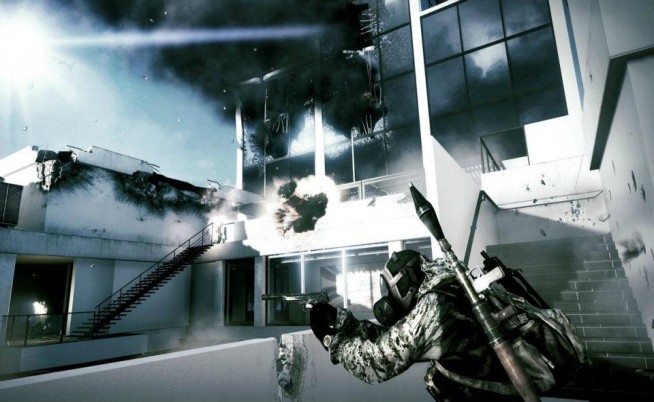 Earlier, we reported that Battlefield 3: Close Quarters would feature the classic game modes of Rush and Conquest. As it turns out, it looks like this won’t be the case after all. Rush fans will have to look elsewhere while fans of Conquest can look forward to a slight variation of the game type we all know and love.

In the latest entry to the Inside DICE series, Lead Designer of Close Quarters Niklas Fegraeus explains that “while HD Destruction has a significant impact on how you experience the second-to-second gameplay, we also had to tackle the challenges of bringing our tried and tested game modes to the smaller scale. We understood quickly that Rush, being a large and progressive mode that takes you on a journey from M-COM to M-COM, simply wouldn’t fit physically. So instead, we turned our attention to Conquest. How could we tailor this essential Battlefield game mode to fit our new type of environment?”

This would obviously mean tailoring Conquest to a much smaller space. Now, before you start screaming accusations of DICE imitating Call of Duty’s Domination game mode, Fegraeus would like fans to know, “I spoke to my Game Designer Gustav Halling who, like me, has a history of competitive FPS gaming. We remembered Unreal Tournament from way back in 1999. It was the first time the world saw the game mode “Domination”, which is very similar to Conquest. There are some differences though, and the Domination type gameplay usually takes place on smaller maps, much like the ones we were creating.”

He elaborated, “inspired by these memories, we used the spawning systems from Battlefield 3 Team Deathmatch and came up with a Conquest mode adapted for smaller spaces. We called it Conquest Domination, and it worked beautifully. In particular, flag defense is suddenly more important, and you get different tactical layers due to the subtle differences the new mode provides.”

Fegraeus also spoke of the inspiration that went into the creation of Close Quarters: “I sat down and spoke with Jhony Ljungstedt, my art director, and had a discussion about how we could achieve this. After bouncing random ideas for a while, he told me that even though that explosive scene from “The Matrix” was rather old, seeing Neo and Trinity turn a lobby into rubble in slow motion did leave a huge impression, and hadn’t ever been properly done in a game. We both agreed and Jhony said he really wanted to be able to create that sensation.”

Since many process heavy elements like vehicles were removed from the equation, and environments and player counts had shrunk, DICE was able to push Frostbite 2 a little further this time around. Hence, the birth of HD destruction. Fegraeus explains, “I wanted to see if we could destroy things in greater detail. I wanted everything to get shot to pieces. Really, really small pieces. In short, I wanted destruction to go High Definition.”

Included in this edition of Inside DICE was footage of an early playtest that nicely shows off some of the HD destruction effects. Make sure to check it out below.

Also make sure to leave your thoughts of the upcoming Close Quarters expansion and new game mode, Conquest Domination, in the comments below!