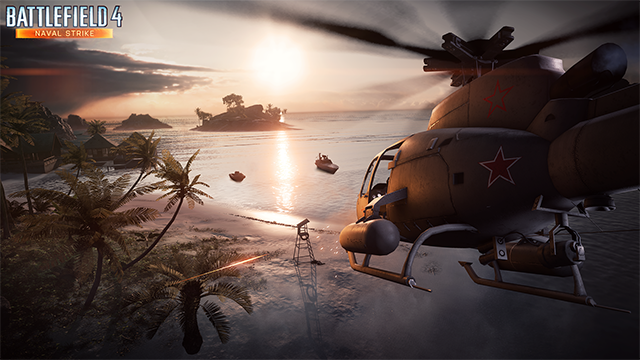 In Battlefield 4: Naval Strike, dropping later this month for Battlefield 4 Premium members, DICE wants to do Levolution a tad differently.

Rather than wowing audiences with spectacle or destructive events, the studio has “been focusing on how the player can interact within the levels to create and block paths for vehicles, or make other strategic use of the environments,” writes DICE in the latest Battlefield Blog update.

Being all about ocean combat, some of Naval Strike’s interactive events will revolve around that style of gameplay. “For example, you will be able to close flood doors to stop vehicles from entering a submarine base and capturing the objective inside,” says DICE. “You can also blow up part of a crashed airplane to create new cover for infantry.”

Though weather effects will be a part of what Naval Strike has to offer, the studio isn’t interested in “copying” popular Battlefield 4 maps like Paracel Storm.

“As for storms, instead of copying what has already been done in Paracel Storm, you can expect different visual styles and weather on all four Naval Strike maps,” DICE explains. “There’ll be calm seas, stormy weather and many other weather effects. For instance, on the Mortar Strike map, you’ll start fighting at dawn and the map will be lit up by the resort lights. As the fight rages on, the sunrise will drench the tropical island in beautiful sunlight.”

Don’t forget to learn all about the new Carrier Assault mode here, a returning favorite from Battlefield 2142.

Bethesda on Elder Scrolls Online Subscription Fee: “Either You’re All In or You’re Not”