We’ve already documented how Anthem was essentially absent from any new announcements at this weekend’s EA E3 event called EA Play. Unfortunately though, that hole gets dug a little deeper it seems. Over at EA Play, EA had kiosks with Anthem playable for the general public. While that in itself isn’t news-worthy, what happened after is.

Over on the Anthem subreddit, the top, most upvoted thread right now is how BioWare only looked for feedback from “influencers” (read: YouTubers, streamers, etc.) at EA Play and not from the actual gamers on the event floor who, y’know, actually play their game.

Here’s the screenshot that’s shown in the thread, with Lead Producer for Anthem Ben Irving telling the fan who tweeted to go to AHQ Anthem and post their feedback. Naturally, the thread is FULL of people upset at BioWare and how they’ve (mis)handled the event. 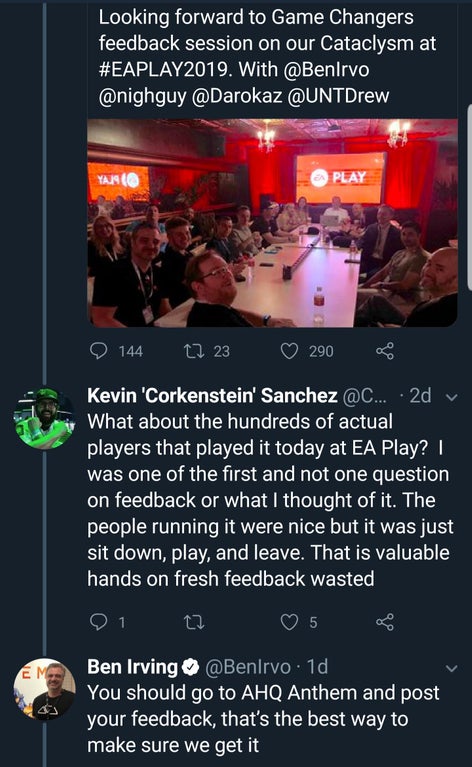 The thread is full of people up in arms on how BioWare values influencers more than actual gamers who paid for the game, and how this was a missed opportunity by the studio to connect to the Anthem player base.

Of course, there is the chance that this is all EA’s doing, but even so, couldn’t someone at BioWare attending the event send out a survey or just ask random people trying the game for feedback?

Is the Anthem community overreacting or did BioWare really did miss a big opportunity here to not only seek feedback, but also to connect to the player base?