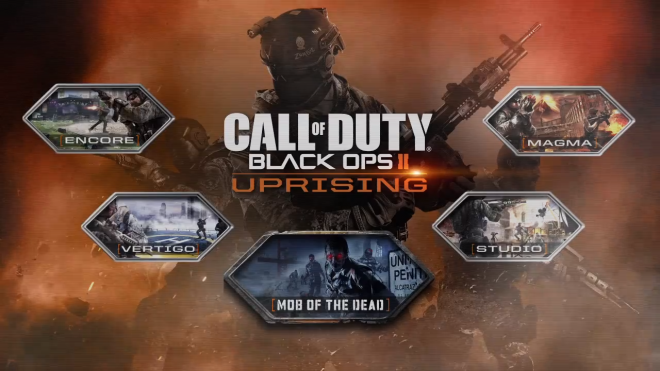 In celebration of Black Ops 2 Uprising DLC’s release on the PlayStation 3 and PC, Activision gives you a behind-the-scenes look at “The Replacers.”

Call of Duty: Black Ops 2 Upsrising is available today on the PlayStation3 and PC. It includes four brand new maps and one of Treyarch’s most ambition Zombies experience to date:

Set on the grounds following a bustling London music festival, the central stage provides players with a key vantage point overlooking the close-quarters battle of the surrounding amphitheater and main tents.

High above the clouds atop a mega skyscraper in India, players must battle across a VTOL landing pad and through the transportation terminal, bringing new dimensions of verticality to every battle.

Set on a Hollywood studio backlot, players will take cover in a wide-array of classic movie sets in this reimagined adaptation on the fan-favorite multiplayer map Firing Range.

Call of Duty: Black Ops II Uprising’s wildly creative new “Mob of the Dead” Zombies experience finds the four prohibition-era mobsters, Billy Handsome(Liotta), Al “The Weasel” Arlington (Pantoliano), Salvatore “Sal” DeLuca (Palmentiri), and Michael “Finn” O’Leary (Madsen) serving time in Alcatraz Prison, only to discover that being behind bars is the least of their problems. With plans to break out of Alcatraz foiled by the rise of the undead, the quartet of inmates will have to lean on their mob-derived skills with firearms, blunt instruments and improvised weaponry as they battle the zombies infesting and overrunning the island. In order to survive, players must work their way through the steel cells and aging concrete buildings while fighting off a multitude of zombified prisoners and guards trapped on the island with them. Additionally, if a player becomes an unfortunate victim, “Mob of the Dead’s” new feature known as “Purgatory” sends players into the afterlife. This new twist on Zombies gameplay is ripe with its own set of objectives, and offers fans a truly new and unique experience.

Uprising is free to those who own the Black Ops 2 season pass. Otherwise, you can pick it up for $14.99.

NOTE: Our apologies for the comment section, once again. DISQUS has a few issues to work out, it seems.