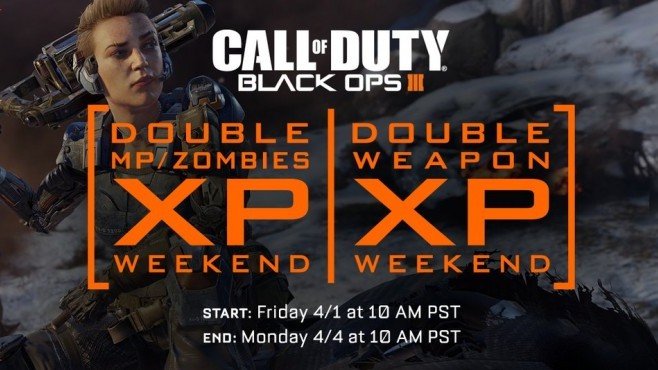 Incoming this weekend, Call of Duty: Black Ops 3 multiplayer is getting another dose of Double XP and Double Weapon XP.

Treyarch announced the news earlier today, adding that users on PlayStation 4 will also get the chance to demo content from Black Ops 3’s Awakening DLC for free for the duration of the weekend. Starting April 1 at 10AM PDT and ending on April 4 at 10AM PDT, Black Ops 3 owners on PlayStation 4 will find all four Awakening DLC maps — Gauntlet, Splash, Rise, and Skyjacked — in normal rotation in multiplayer playlists. The new Der Eisendrache zombies mode will also be accessible for the weekend. All of it is automatically installed, so you won’t have to download any extras.

As for Double XP and Double Weapon XP, that starts and ends at the same dates and times, but for all platforms.

In other PlayStation-specific news, Treyarch and Activision also announced that Black Ops 3’s Awakening DLC will come to PlayStation 3 on April 5 for $14.99. Originally, Awakening was only announced to arrive on PlayStation 4, Xbox One, and PC, but it looks like the studio is making it work Sony’s older console as well. No word yet if it will also make to Xbox 360 at a later date.