While that fact itself may not interest you, what caught our eye, as well as the eye of tipster @DavidCarcedo, was this “Black Ops III” t-shirt designed around the series’ most popular multiplayer map, Nuketown.

CLARIFICATION: As many readers have pointed out, the shirt design isn’t new, but the fact that Activision and Treyarch are calling it a “Black Ops III Nuketown” t-shirt raises some questions. 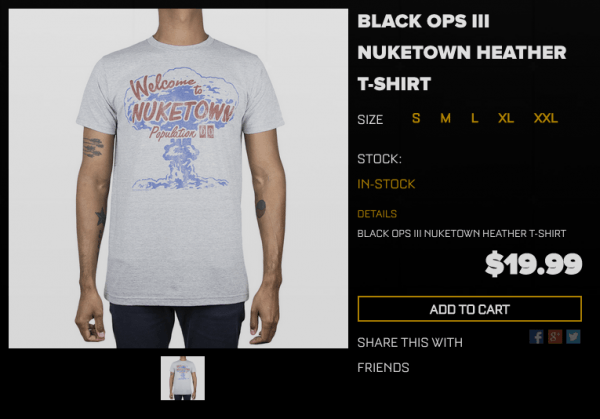 First introduced in the original Black Ops, the hectic close-quarters map was re-imagined in Black Ops 2 as Nuketown 2025 two years later. With the appearance of a Black Ops 3 Nuketown t-shirt in the Call of Duty store, we can’t help but wonder if Treyarch is considering a 2065 version of map for Black Ops 3’s multiplayer. Bringing it back would seem like a no-brainer, after all. You can check out the store and the t-shirt for yourself right here.

What do you think? Is the return of Nuketown in Black Ops 3 a likely scenario? Would warm your heart to battle it out on a next-gen version of the map?

Black Ops 3’s big reveal is tomorrow, buy you can catch up on the latests leaks and gameplay details right here while you wait.