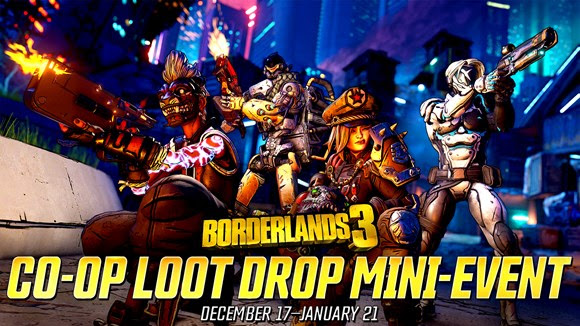 It’s time for the Borderlands Brigade of players to take up arms and go online again, as 2K has announced a new and free “Co-Op Loot Drop Mini Event” for Borderlands 3, which encourages players to team up with friends to earn more gear and loot as they play this limited time event!

Here’s the details on the new co-op event straight from the Borderlands team:

From December 17 at 9:00 AM PT through January 21 at 8:59 AM PT, all Badass enemies will drop more loot than normal whenever you’re playing online or local split-screen co-op. Plus, the bigger your player party, the more loot that drops, making this the perfect time to boot up four-player split-screen for PlayStation 5 and Xbox Series X|S!

Co-op Loot Drop’s effects apply to all Badass enemies game-wide, including any you encounter in paid add-on content*: Moxxi’s Heist of The Handsome Jackpot, Guns, Love, and Tentacles: The Marriage of Wainwright & Hammerlock, Bounty of Blood, Psycho Krieg and the Fantastic Fustercluck, and even the Arms Race portion of the recent Designer’s Cut add-on (albeit at a slightly lower bonus rate for balance purposes).

If you’re playing with a new group of freshly minted Vault Hunters, the Co-op Loot Drop is a great way to gear up quickly. Meanwhile, more seasoned slayers can take advantage of the boosted co-op rewards in challenging endgame content like Takedown at the Maliwan Blacksite and Takedown at the Guardian Breach.

Whether you’re quarantined with pals or just gaming online, this mini-event offers quality bonding time with a multitude of mayhem-filled moments. Show those Badass enemies who’s boss and reap the extra rewards before Co-op Loot Drop ends on January 21, 2021.

Be sure to check out the rest of our Borderlands 3 features here at MP1st.

Borderlands 3 is now available for the PS5 and Xbox Series X|S.