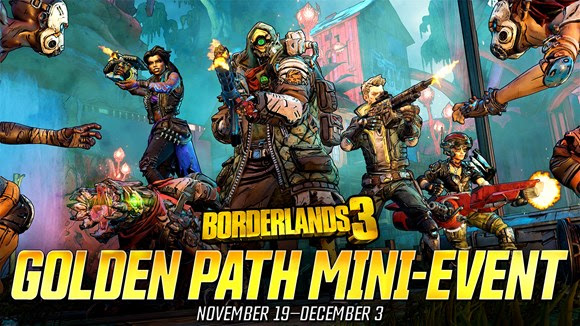 Fans of Borderlands 3 are going to get a kick out of the latest event happening right now, as 2K has announced that the “Golden Path” mini-event allows players to load up on legendary gear when completing campaigns and story missions — thereby leveling up their new characters quickly.

Here’s the details from the latest press release for the mini-event by the Borderlands team:

Your rewards for saving the universe are about to get Legendary – literally. From November 19 through December 3, get Legendary item rewards for completing select campaign missions during the free Golden Path Mini-Event for Borderlands® 3. Get your mitts on the Lyuda Legendary Vladof Sniper Rifle, Handsome Jackhammer Legendary Hyperion SMG, Nemesis Legendary Dahl Pistol, Hellwalker Legendary Jakobs Shotgun, and more!

From November 19 at 9:00 AM PST to December 3 at 9:00 AM PST, select missions in the main Borderlands 3 story campaign are guaranteed to grant Legendary rewards. Note that this lucrative loot buff does not apply to optional side missions or any missions in campaign add-ons. This is the “golden path” we’re talking about, after all.

If you’re a veteran player, now is the perfect time to power-level a new character and try the additional Skill Trees included in the new Designer’s Cut* add-on, available separately or as part of Season Pass 2.* With any luck, you’ll snag the loot you’ve always wanted and reach the endgame ready to rock with a fully decked-out Vault Hunter. If you’re completing the campaign for the very first time, this Legendary loot will give you a killer edge as you race to defeat the Calypso Twins.

Be sure to follow the rest of our Borderlands 3 features here at MP1st.