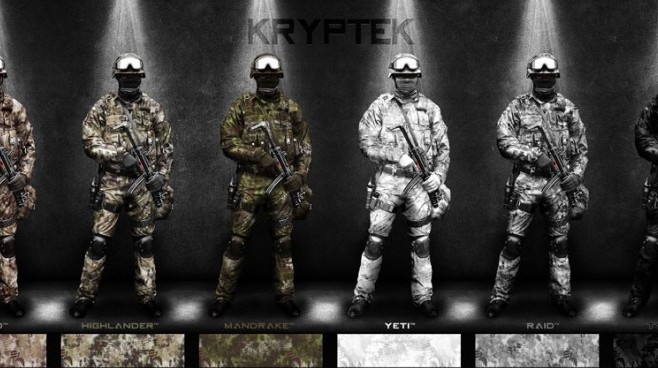 It appears that outdoor apparel manufacturer Kryptek will be supplying the inspiration behind some of the weapon and uniform camoflage patterns featured in Sledgehammer Games’ upcoming shooter, Call of Duty: Advanced Wafare.

The company provides “combat proven features and designs in ultra high-performance technical and tactical outdoor adventure apparel” that is “proven in austere combat environments and extreme hunting conditions,” reads their mission statement. But according to a banner on their home page, it looks like their patterns will also serve as a basis for some of the designs used in Advanced Warfare.

It’s not clear if their designs will be for use in single player, multiplayer, or both, but they certainly have some pretty sweet patterns that would make for some badass-looking exo-suit soldiers or sleek weapon aesthetics.

You can check out the full list of patterns on Kryptek’s official website. Their range includes patterns with names like Mandrake, Raid, Highlander, Altitude, Nomad, Banshee, Typhon, Neptune, Yeti, and Pontus, so keep a look out for those camo titles in Advanced Warfare, perhaps as unlocks, when it launches November 4.

Which camo pattern catches your eye the most?