This February, the top Call of Duty: Ghosts Clans can look forward to a brand new division in Clan Wars open only to the best of the best.

The Diamond Division, only open to Clans with at least two first place wins in the Platinum Division, plays out on a schedule that’s separate to all other divisions. It also introduces a separate leaderboard to track your performance and the amount of “Diamond Points” you earn throughout the Clan War.

You can visit the Call of Duty App for yourself or check out the screen grab below for specific details on scheduling. 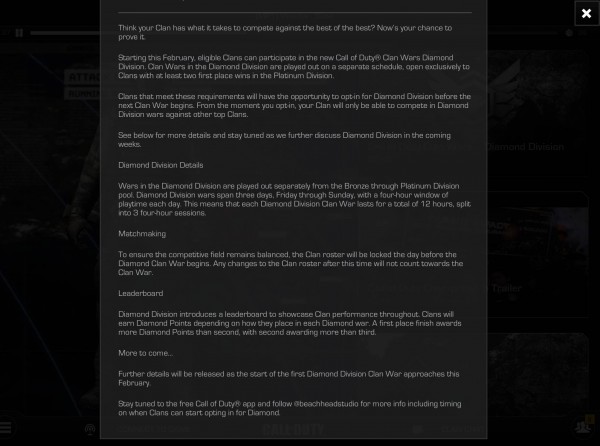 More details are expected closer to the launch of the new division this February.

Meanwhile, it’s time to start preparing for next week’s Clan War which begins on Wednesday the 15th at 12pm PST / 8pm GMT, according to a recent announcement from developer Beachhead Studio.

If you haven’t yet, be sure to read up on the incoming changes Call of Duty: Ghosts developers are making to Competitive Call of Duty in the coming weeks. You can also catch the next Call of Duty Championship announcement trailer right here.