At all major US retailers, Call of Duty: Ghosts is now on sale for a limited time, Activision announced today.

You’ll be able to pick up the game on any platform – PC, current-gen, or next-gen – for $39.99. Amazon, Best Buy, GameStop, and Target are all taking part in the sale, Though Target has next-gen versions of the game listed at $49.99 when purchased online. In Canada, only Future Shop appears to be offering the game at $39.99, while Walmart is offering $10 off the current-generation versions of the game, according to Call of Duty’s official website.

It’s not clear exactly when the sale will end, though Future Shop in Canada lists the end date as March 13.

UPDATE: According to Xbox, the sale goes through to March 15.

Also, don’t forget that Call of Duty: Ghosts multiplayer is now free-to-play on the Xbox One and and Xbox 360 until March 10. Check out the details here. 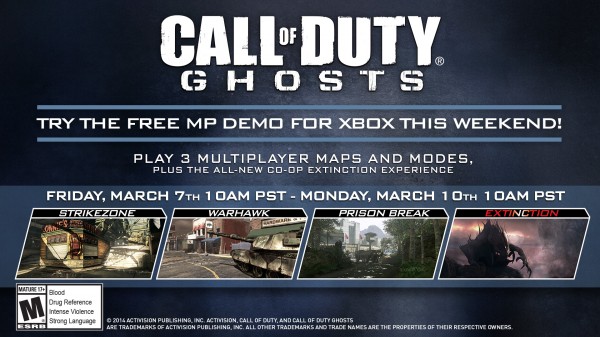 Find out where you can buy Call of Duty: Ghosts right here.

Watch the MLG Call of Duty US Championship This Weekend