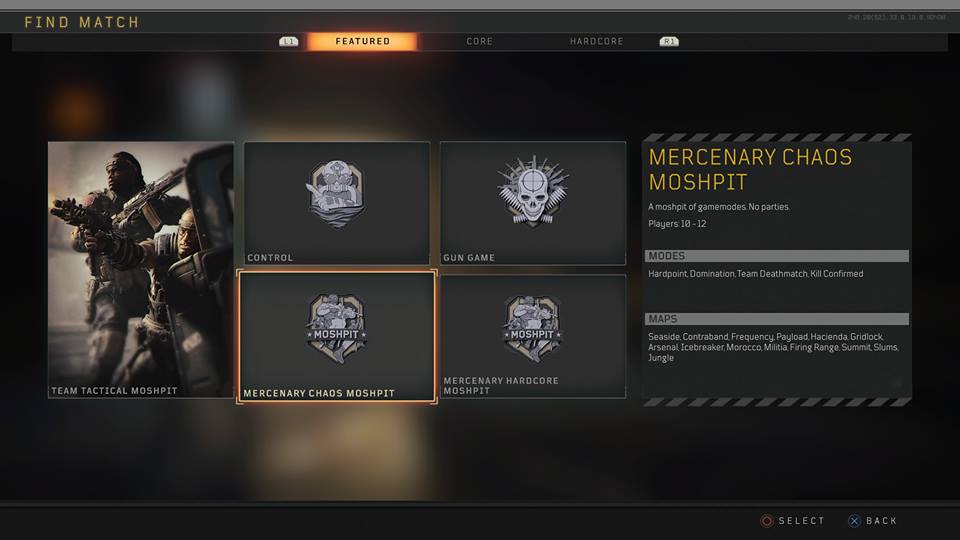 Here’s the full list of changes made to the latest Black Ops 4 game settings update that rolled out yesterday (via Treyarch):

We’ve also unlocked the Blackout Character Missions for our Black Ops 4 Chaos Storyline crew and increased Character Mission quest item spawn rates, so get out there and complete those hidden challenges to drop in as Bruno, Diego, Scarlett, and Shaw.

In Multiplayer, new playlists have arrived in the Featured category, including the debut of Team Tactical Moshpit, Mercenary Chaos Moshpit, and Mercenary Hardcore Moshpit. Read below for all the details on these new playlists and let us know what you think. As a reminder, playlists will be rotating into the Featured category on a weekly basis, so keep an eye out for fresh new game types and the return of fan-favorites each week.

We’re also kicking off our first 2X Tier Boost Weekend in Multiplayer and Blackout starting on Friday, along with 2X Nebulium Plasma in Zombies on all platforms from 10AM PT Friday, Nov. 9 through 10AM PT Monday, Nov. 12! Players will earn Contraband Tier progression twice as fast during this event, and we’ve got new ways to boost your Contraband Tier progression coming very soon. Stay tuned.

For our Zombies players: game stability has remained our #1 priority, and while we’ve implemented additional crash fixes listed below in today’s update, we know we’ve still got more to deliver for the Zombies community. To that end, we will have more shortly from the Zombies team that will address current development, as well as how we’re prioritizing stability and gameplay improvements.

And now, onto what’s new in the game:

We’ve made the following updates to the game (Global) since Friday’s update:

We’ve also made the following changes to PC since Friday’s update, in addition to the ones listed above:

Jump in and let us know what you think of the new Blackout weapon tuning, Blightfather event, new MP playlists, and everything else that’s new in today’s update!

Treyarch has released a new Call of Duty: Black Ops 4 game settings update today (server-side hotfix), and it seems the studio has introduced a few new playlists into the rotation!

With this new Black Ops 4 game settings update, the Gun Game mode has been taken out as the featured playlist, and has been replaced by “Team Tactical Moshpit” which is a 3v3 match of team deathmatch, Kill Confirmed, and Search & Destroy!

Another new but welcome playlist is the Mercenary Chaos Moshpit, which has Hardpoint, Domination, Team Deathmatch, and Kill confirmed included! This means that squads aren’t allowed, it’s 6v6 instead of just being 5v5, and in Domination, flags are capped much, much quicker! This mode is perfect for lone wolfers (like me!).

Once Treyarch releases the official Black Ops 4 game settings update notes for today, we’ll update the post to reflect it.

In other Black Ops 4 news, check out the official game companion app and its features right here. We also reported on how the community is not happy with how grindy the Black Market is, so let’s hope Treyarch does something about that soon.