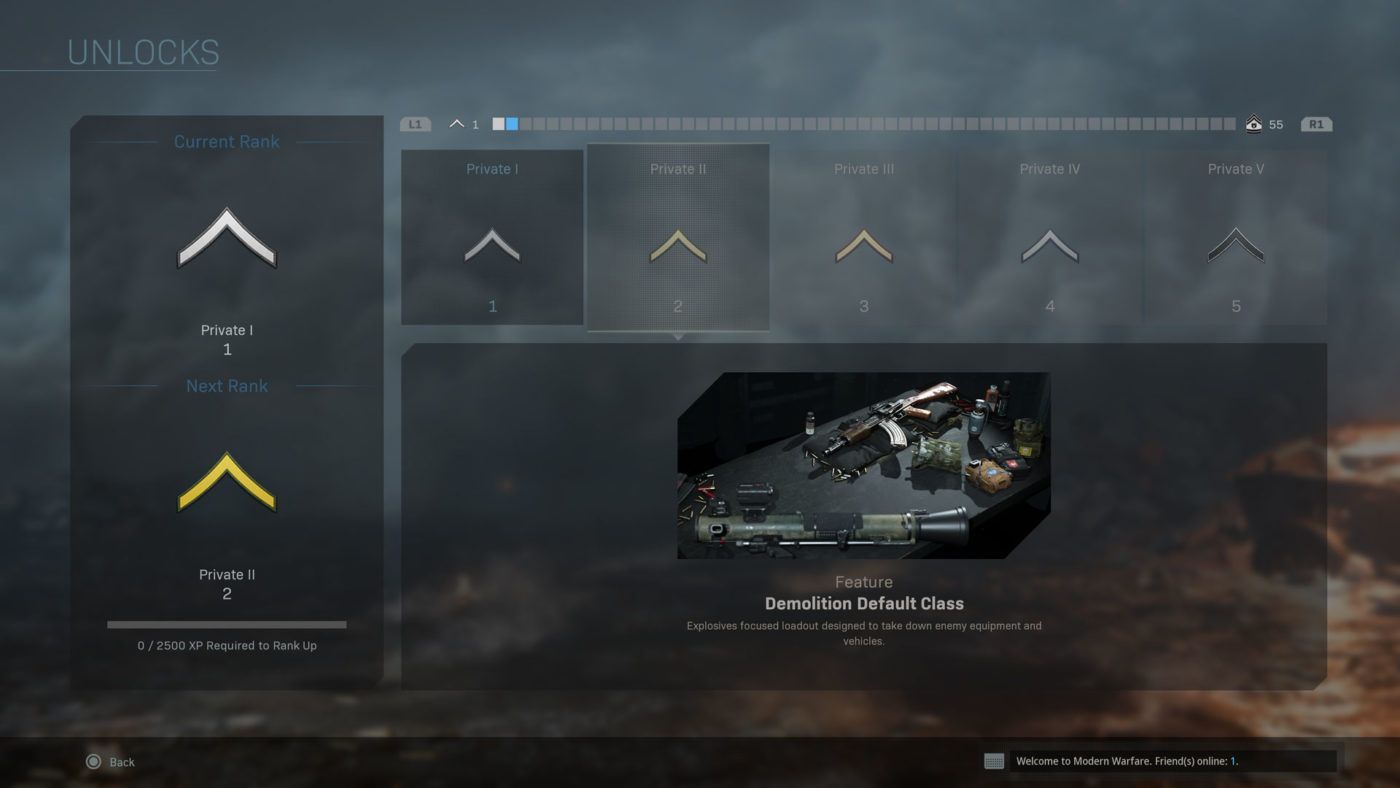 Remember when a rumor surfaced on how the Call of Duty: Modern Warfare progression system was abandoning the franchise’s Prestige system in favor of seasonal ranks? Yep, that bit of rumor isn’t a rumor anymore, as it’s now confirmed!

In a new blog post, Activision has outlined the Modern Warfare progression system, and the Prestige ranks have been replaced by Officer Ranks that will be reset for each season. Players will be able to rank up normally, and this will show as their “Enlistment Rank” that runs from level 1-55, which is like your standard Call of Duty. However, once you reach that, you won’t need to reset your progress, but rather, you’ll start earning “Officer Ranks.”

The tl;dr version can be seen below, with the more detailed overview mentioned in each section:

Ready for Enlistment? Here’s a Recap

To reiterate how progression works in Call of Duty: Modern Warfare, you will:

·      Rank up through the Enlisted Ranks (1-55) to unlock base weapons, perks, equipment, Killstreaks, and Field Upgrades.

TO UNLOCK MORE FOR YOUR BASE WEAPONS…

·      Rank up your weapons individually though the weapon progression system. Gain experience for each weapon to earn attachments and base camouflage patterns, and complete camo challenges to complete camo sets.

THEN, AT THE START OF EACH SEASON OF CONTENT…

·      Begin your Season of Officer Ranks, where you will receive an Officer Challenge at each rank leading up to 5-Star General (Rank 100). Completing each challenge rewards a ribbon. Earning 10 ribbons awards an Emblem, and all 100 ribbons gives you an even more badass Emblem.

AT THE END OF A SEASON…

·      There is scheduled to be a number of seasons packed with tons of free content, where you will also progress through Officer Ranks.

Here are how Officer Ranks work, as well as Ribbons, Seasonal rewards and more.

The Officer Ranks: Seasonal Rewards and Badges of Honor

In this new Progression system, a player’s Enlisted Ranks of 1-55 are never reset and they will never have their functional items re-locked. Instead, players now progress into the new Officer Rank system:

Rather than having to reset your Enlisted Rank, Modern Warfare will introduce Officer Ranks, a seasonal ranking system complete with rewards and 100 ranks to progress through. When you reach Officer Rank 1, you receive a cosmetic Weapon Blueprint for your promotion.

Ranking up through the Officer Ranks requires the same gameplay completion practices as you previously utilized in the Enlisted Ranks: by earning XP.

Each time you level up within the Officer Ranks, you will unlock a special Officer Challenge. Similar to Daily Challenges, these objectives will reward plenty of XP upon completion, but also give you a special Seasonal Ribbon.

Earning 10 ribbons gives you a special Season Emblem, with each additional 10 ribbons evolving that emblem. Collecting all 100 Ribbons unlocks an animated Emblem, which serves as proof of getting the ultimate achievement for that season. Reach the maximum Officer rank, and expect to receive another cosmetic Weapon Blueprint.

The initial set of Officer Ranks will be available at launch: Once you complete all 55 Enlisted Ranks, you will arrive at Officer Rank 1.

According to Activision, any Officer Rank, Challenge Ribbon or Seasonal Emblem are permanently recorded in the game. However, whenever a new Season starts, your Officer Rank is reset so everyone will start the new Season on the same playing field.

Outside of regular challenges, the game will also include Challenge Missions.

Challenge Missions: Another Way to Rank Up & Earn Cool Rewards

Outside of normal gameplay, Daily Challenges, and seasonal Officer Challenges, another huge opportunity to earn XP for Enlisted Ranks, Officer Ranks, and Player Level is through Challenge Missions contained within the Barracks part of the Multiplayer Menu.

At launch, there will be a variety of Challenge Missions available, with more to be released within forthcoming Seasons.

Challenge Missions may require you to play specific game modes or use a particular weapon class in order to complete them, so prepare for a variety of content to test all facets of your gaming prowess!

As expected from the rumor, weapons can be leveled up in Modern Warfare, and doing this will unlock attachments, weapon perks, camos and more. Weapon levels are entirely separate from player levels and ranks, and you will be able to level up weapons independently.

Each weapon level comes with something, be it a gun attachment, perk or a camo for that weapon. As for gun camos, after earning the base camo, a set of camo challenges is unlocked, which will let you earn those rare skins. No mention of whether we’ll see gold or diamond camos come back, but it does mention that there are over 100 earnable camo patterns and how there are “a few extra camoos for completionists” which seem to indicate that we’ll see gold camos and such again.

Regarding post-launch content, Modern Warfare will have seasons, and each season will have its own Officer Rank progression track. Activision says that each season will bring in a mix of new maps, modes, missions, events and more.

Will the community welcome this or will they want Prestiges back? What’s your take? Let us know down in the comments.