With Call of Duty: Modern Warfare set to launch today, some ingenious gamers managed to play the game early (digital download versions), by changing their system’s country setting to New Zealand. Unfortunately though, Xbox One owners have ran into a Modern Warfare Xbox One crash issue that’s game-breaking already, and the game isn’t even officially out in the entire world yet!

This was posted by Reddit user kris9512, with multiple users chiming in how they’ve also experienced this Modern Warfare Xbox One hard crash issue.

It’s done it to me once already and there’s been mutiple reports of others claiming it to have crashed their’s. PLease don’t let this be another black ops 4 fiasco where the crash bug in blackout lasted weeks. Pls.

Edit: It’s done it again. OH MY GOD, THIS NEEDS TO BE PRIORITY. WE’VE BOUGHT A DEFECTIVE PRODUCT.

Ps4 players, please upvote this. I know it doesn’t concern you guys but this isn’t fair. This is potentially going to destroy launch night for everyone on the X.

Here are some of the other gamers who are experiencing Modern Warfare Xbox One crashing issues too. 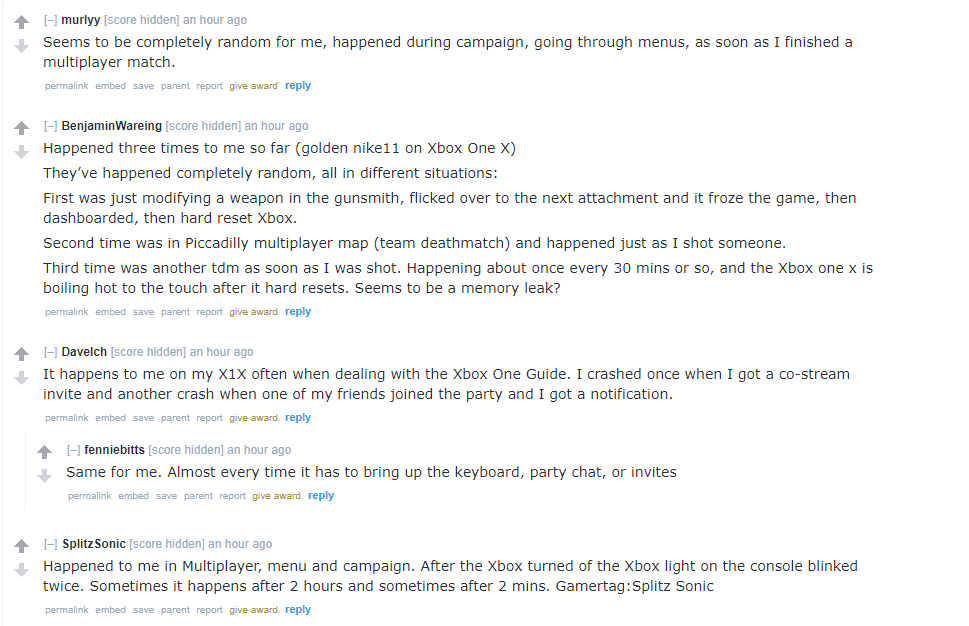 Fortunately, Infinity Ward is aware of it. In the same thread, Infinity Ward Senior Communications Manager Ashton Williams has posted a message, and asked other people who are experiencing the same to give as much info as possible, so the devs can pinpoint what’s causing this issue.

Hey OP, can you tell me you gamertag and where you’re experiencing this? Any details like what you were doing when it happened (did you get out of a vehicle, change loadouts, etc.)?

Anyone else who runs into this, please give me as much information as possible please.

Hopefully, this gets resolved soon. I mean, not only are Xbox One gamers not getting Spec Ops’ Survival mode, they’re also not getting some of the challenges as they’re exclusive to PS4, and on top of that, they’re experiencing this, too! That’s a bit much, no?

Call of Duty: Modern Warfare Reviews Round Up

Call of Duty: Modern Warfare Reviews Round Up