Call of Duty Warzone Details – Everything You Need to Know

What is Call of Duty: Warzone?

Call of Duty: Warzone is Infinity Ward’s modern shooter take on the Battle Royale genre. Now, Battle Royale is nothing new to the Call of Duty series as Black Ops 4 featured Black Out. However, Infinity Ward is upping the antics with more players and features than ever before, to give one truly unique battle royale experience.

What is Call of Duty: Warzone’s Plunder Mode?

In Plunder, teams are tasked with collecting money and must reach $1 million within the 30 minute time window. First team to reach $1 million dollars will offset an overtime counter, where all teams will have the opportunity to rack up some major doe. The team with the highest amount in the end wins.

When does it release and on which platforms?

Full rollout times can be found below 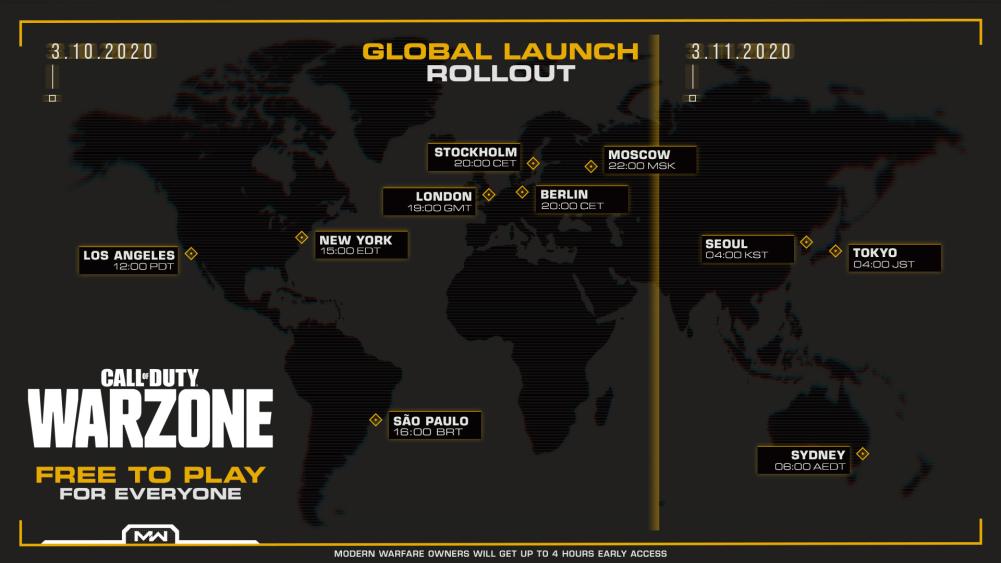 How much is it going to cost?

How big is the file size?

Is PlayStation Plus subscription or Xbox Gold membership required?

Since the game is free-to-play, you will not be required to have a PlayStation Plus subscription on the PlayStation 4. As for Xbox users, free-to-play titles are locked behind the online paywall, so yes, an Xbox Gold membership will be required.

Are there benefits to having a subscription to either platform?

Outside of their normal offerings (free games, discounts, online play), the only subscription that will get Warzone benefits is PlayStation Plus. If you are subscribed to PlayStation Plus, Warzone players will receive exclusive monthly drops similar to Fortnite, Warframe, and many other free-to-play titles.

Does the game support cross-play? With what platforms?

Like Modern Warfare, Warzone does indeed feature cross-play support between PC, Xbox One, and PlayStation 4 owners.

Can you opt-out of cross-play?

While Modern Warfare allowed you to turn off cross-play features via menu, it would appear that Warzone does not allow this option according Drift0r

Is there Unified progression between the platforms?

Yes, Warzone does feature cross-save progression between all the platforms. All you have to do is be signed in with your Activision account on your desired platform and progress will carry over. There is also no level cap.

How many players does it support?

At launch, Warzone will be able to support a total of 150 players on a single map. There have been talks to expand this number to 200, though that is yet to be confirmed.

Is there a Battle Pass? What if I bought the Call of Duty: Modern Warfare Battle Pass, will this apply to Warzone?

Yes, however, they are solely cosmetic and do not affect gameplay. The same item shop that is in Modern Warfare is the same one in Warzone as is the Battle pass. It’s all shared. What you buy will show up in both versions, even if you don’t currently own the paid one.

We’ll be sure to update this post with any additional questions you may have. In the meantime, be sure to check out some early gameplay before Warzone drops tomorrow: Call of Duty: Warzone Gameplay Videos