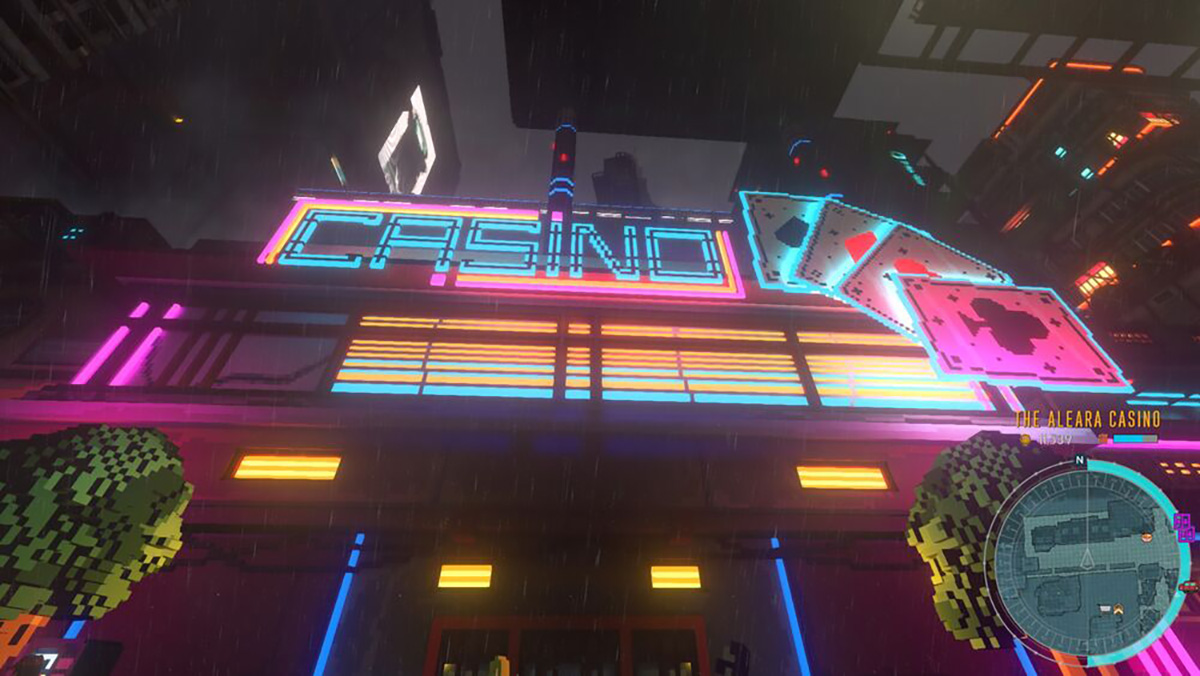 Cloudpunk is getting a sequel-sized DLC later this month called City of Ghosts. It’s a story that intertwines with the base game’s location of Nivalis and stars both the original protagonist. Rania and a brand new one. We’ll be exploring this stunning cyberpunk world as two characters for the first time. Getting two sides of a story that comes together in unexpected ways. This story is also set to be much darker than the base on. It’s going to explore avenues that we’ve never seen in the world before. That’s why I think it should open up the Aleara Casino.

If you’ve played Cloudpunk before, you could have missed this location very easily. It’s located in the Fulcrum Sector, next to the first point at which you meet The Falconer. Unfortunately, it’s just a closed-off building, like most of those found in the game. You don’t get to go inside and explore the potentially wonderful things that await you in this dystopian debt-focused cyberpunk future. But the DLC could change that.

What’s Inside the Casino?

By opening up the Aleara Casino, players could get a glimpse of how casinos have changed. In classic Cloudpunk fashion, everything would look just as you’d expect it to but have a twist that you never see coming. It could be that you enter into a pod and start taking part in betting in online casinos, but physical representations of them in a digital world. Maybe you’d even get to interact with other patrons and find out a bit more about the world of casinos in the context of Cloudpunk.

What I think would really suit the world is if you’re betting your body as soon as you enter the casino. It’s a twisted reality that would leave many without a body until they win at a table. This means that players are forced to keep betting until they finally win. Which always results in more money for the companies running the online casinos. It’s exactly what the world of Cloudpunk would have in terms of casinos.

For Cloudpunk – City of Ghosts, players could head into the Aleara Casino searching for one person in particular. Then, they’d have to start betting to get answers and potentially even lose their body. We’ve already seen that you can buy bodies and shells like the one for Rania’s dog. So there’s no question that this is possible within the game’s lore. This dark tale could see one protagonist rescue another, and it would be a great way for them to interact without ever actually knowing each other.

Something that’s actually missing from Cloudpunk right now is minigames. Any sort of task that’s even vaguely outside of the scope of the main story is completely absent. While this is sort of the point with the base story, the sequel-sized DLC is adding in a huge chunk of content. I’d love it if all of that content was more of the same, but I can’t help but think that the experience would actually benefit from the addition of some minigames. I’m not talking about fishing or activities that take you way out of the game’s traditional scope, more those that fit in with the established world and the things players are doing.

That’s why heading into a casino and taking part in any sort of minigames there would fit perfectly. Even outside of the sections of the story that see you head into the Aleara, you could have the option to return and earn more money if you want to. The base game has hundreds of collectibles to soak up and sell so that you can buy all manner of trash for your apartment and HOVA. Make it possible to gamble for that money and streamline the process, adding some more risk and reward, and even showing players what happens when you incur too much debt.