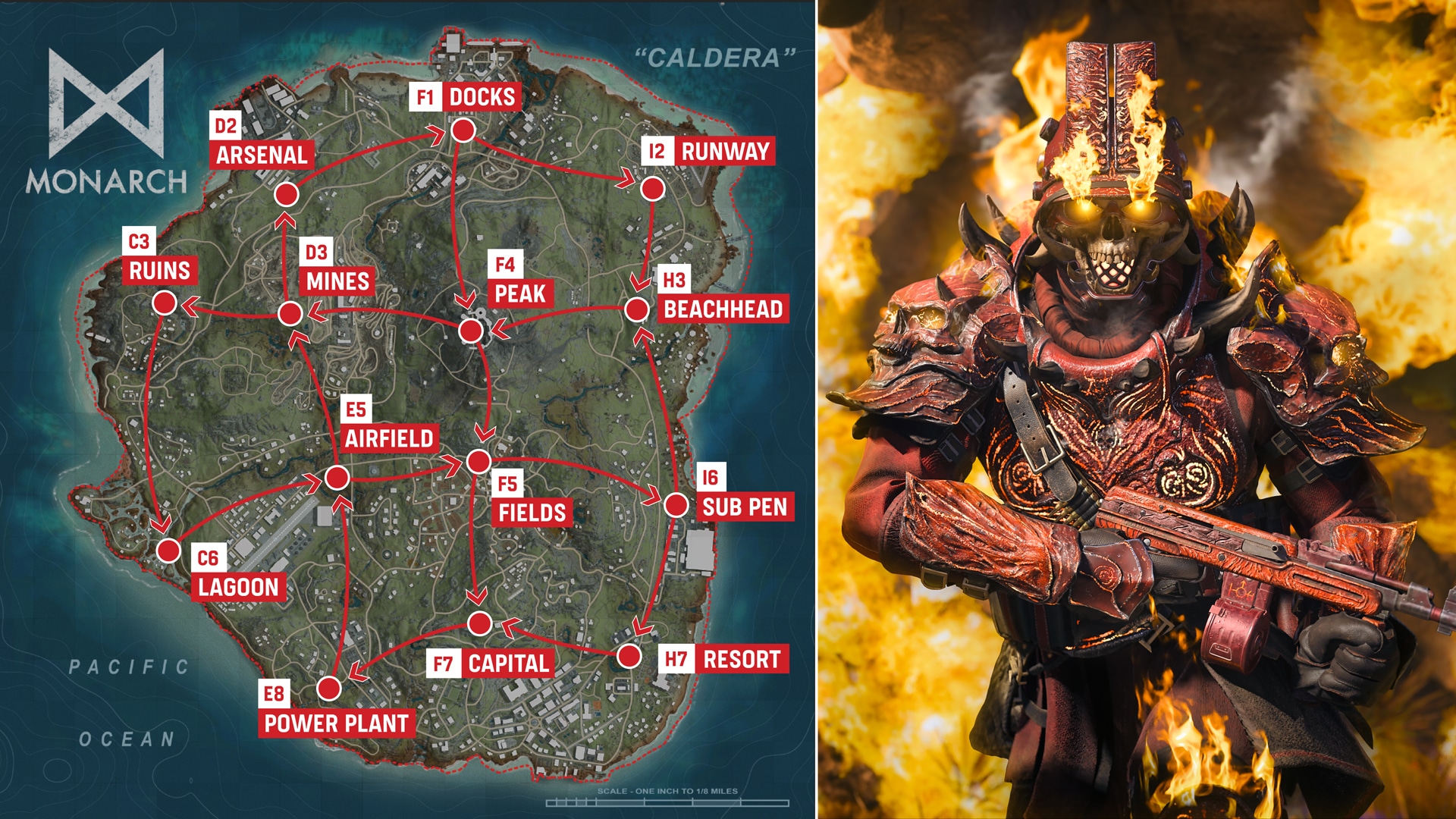 Call of Duty players have a ton to look forward to later this week, as Activision has unveiled the changes coming to CoD Vanguard & Warzone Classified Arms Releoaded! The update will be covered in the two titles, with Vanguard set for May 24 and Warzone the next day, May 25. Check out a rundown of the changes below.

Here’s the tl;dr version of the highlights incoming this week!

Updates to Warzone include:
Updates to Vanguard include:

Remember that rumbling and creaking beneath Caldera’s surface before Season Three’s launch? Those were the rickety mine carts being rediscovered by intrepid explorers, who were busy opening a new way to get around the island!

Developed by Toys for Bob, this new Underground Transit System features 14 access points, indicated on the Tac Map and minimap by a silver “vault door” symbol.

Keen surveyors of Caldera during Season Two already know where seven of these access points are, as they are the “hidden” Nebula 5 bunkers. The door to the mine-cart hub room can be found right after dropping into each bunker.

The other seven access points are small hatches into the mine-cart hub area. Here, you can find a map of the system, with each hub location corresponding to a letter and number on your Tac Map. Lower numbers indicate areas to the north — for example, the hub near Arsenal is B1 — while higher numbers (e.g., B14) are hub areas near southern points of interest (e.g., Resort).

To travel via mine cart to another hub area, simply interact with the circular hatch and walk toward the cart. When doing so, the destination name will appear on your screen — you can also check the map to see how it interacts. After a few seconds of travel time, you’ll instantly appear at your destination . . . Hopefully with no enemies waiting on the other side.

Scenario: you are in a dead sprint across the map when suddenly, a sniper from 300 yards out starts taking pot shots. Somehow, one connects to your head, and you’re out of the game.

Serpentine, the new Perk arriving from Vanguard, hopes to remedy this without completely leaving marksmen out to dry.

Available in the Perk 1 slot for all players after the update, Serpentine’s description is as follows:

“Sprinting reduces incoming damage from bullets, explosives, and fire by 20%.”

Will it be an “auto-pick”? Not necessarily — consider some of the other options in the Blue Perk 1 slot: currently, Double Time (which boosts Tactical Sprint) and Cold Blooded (which directly counters Combat Scout) are two extremely popular choices in the current meta. Then there is Quick Fix, which shaves seconds off health-regeneration time, which the most elite players tend to gravitate toward. And we didn’t even talk about E.O.D., a great Perk for those who despise dying to explosives.

Check your Tac Map or minimap to see where these areas are and decide whether to set a course for fortune and frequent fighting.

This year could arguably be a strong one for Warzone solo players, with Rebirth Resurgence Solos being a fast-paced variant of the traditional Battle Royale free-for-all, and Caldera Clash being an awesome place to level up weapons.

With Classified Arms Reloaded, Solo players will get another high-intensity limited-time mode and – as the name suggests – fight to become the Champion of Caldera.

Launching on the first day of Classified Arms Reloaded, Champion of Caldera features 150 maximum players and a single, continuously closing circle in a Battle Royale-style fight for survival.

All Operators will drop in with their Custom Loadout, a Gas Mask, and a single Redeploy Extraction Token. The item pool is slightly altered to emphasize equipment not normally found in Loadouts and Epic- to Legendary-rarity weapons. Collect Cash to visit an upgraded Buy Station, which features the Advanced UAV, Explosive Bow, and even the Specialist Bonus for a hefty fee.

Unbeknownst to us, upgrading the island to include radar towers gave the powers-that-be the ability to scan for hostile forces.

At some point during standard Rebirth Resurgence matches, Operators may be alerted of an Occupation Scan. At this point, they will need to go prone or else their position will be revealed to every other player on the Tac Map and minimap.

Although this effect lasts for only a short period of time, and ends early if the Operator perishes, the Occupation Scan should keep everyone even more alert on an island from which they may need to escape . . .

Operators – as noted during our assignment briefing, our goals in the Aral Sea were to reinforce the stronghold known to civilians as Rebirth Island.

As you know, our orders were to construct weapon lockers for boots-on-the-ground defenses, install radar towers for early threat detection, clear the DZ for armored vehicles, and unlock the “golden bunkers” kept sealed for several decades.

Given those parameters, our 60-day assignment could be considered a success. However, we are now aware that at least some of these upgrades to our defenses have been compromised.

On [[REDACTED]], Agents [[REDACTED NAMES]] informed us of hostile forces hacking into radar towers to perform occupation scans. Information on these scans have now been declassified after we confirmed leaks to civilian media, to be embargoed for release on May 23 at 1000 Hours in the interest of public safety.

Although there are no physical threats detected, we are led to believe that mercenary forces, currently stationed at [[REDACTED]] may be contracted shortly to attack our Alliance on Rebirth Island.

In Call of Duty: Vanguard, Classified Arms Reloaded will bring Sphere, a new small Multiplayer map featuring an underground weapons lab hidden beneath the façade of a coal mine.

On the top floor, battle in the dusty environs of a mock coal mining village, featuring wooden buildings, crates, and natural formations that will make you feel like a veritable gunslinger in the Old West.

Head underground and you’ll be greeted by the Mine, Concrete Tunnels, Workshop, and the central Lab, where Operators can flood in from all sides.

The masked fighter and folk hero Kim Tae Young is deploying just in time to link up with her squadmates Mateo and Florence, complete with her own 20-level Operator XP progression that leads to several Operator Skin unlocks and other rewards.

Trained by her mother as a fighter, Tae Young donned a mask to conceal her identity while helping families cross the North Korean border to safety. She soon earned a reputation among the Korean people as a local folk hero and keeper of justice. Even the briefest glimpse of her Dokkaebi mask instills hope in her people and fear in her enemies.

Her preferred weapon is the new H4 Blixen – use it while playing as Kim Tae Young to gain bonus Operator XP and Weapon XP for this weapon.

The Owen Gun is the most notable slower-firing SMG in this weapon category, but in Classified Arms Reloaded, the H4 Blixen will try and make a claim to power.

In Vanguard Multiplayer, the H4 Blixen delivers a reliable three-shot kill at a farther range than the Owen Gun, albeit with a slower rate of fire. It also has three more bullets per standard magazine and slightly better Vertical Recoil Control, Aim Down Sight (ADS) speed, and reload quickness. The recoil pattern can take time to learn — like all weapons in Call of Duty — but knowing the H4 Blixen’s kick can make it more viable in those mid-range engagements, rather than just have it hold its own up close.

Whether your Operator wants new ink or Mastercrafts, the Bundles in Classified Arms Reloaded have you covered. Here’s a taste of Store Bundles on offer:

Who knows? Maybe it’ll give you some inspiration for your next IRL design; just know that if it isn’t done by these three masters of ink, it won’t be a masterpiece.

The “Tattoo Machine” SMG is built for fast-paced CQB, with a Recoil Booster and an increased-caliber magazine. On its own, it serves as a strong close-quarters option in both Warzone and Vanguard.

The same could be said for the “Tattoo Infection” Assault Rifle, although it leans more toward solo modes in Warzone and longshots in Vanguard Multiplayer. The .30 Carbine short magazines combined with the Ragdoll Barrel make for a weapon with better damage at range, and the rest of the build is great for staying on target.

In-theme with Classified Arms, the Reloaded Bundles coming to the store include multiple Mastercrafts of Vanguard weapons.

Look for the Tracer Pack: High Voltage Reactive Mastercraft Bundle to kick off the season, which contains an electrifying Heroic “Stabistor” Sniper Rifle that is sure to send shock waves through your competition.

Also available this season is the Tracer Pack: Dark Aether Mastercraft Bundle, a Zombies-themed pack that should spark some excitement for the first round-based experience in Vanguard, coming soon. Wield the “Dark Jinx” SMG and witness its awesome Dark Aether Tracer powers, effective against both the living and the dead.

At the end of the season, more Mastercrafts will become available, including the Tracer Pack: Tread Lightly Mastercraft Bundle, which features prototype-themed weaponry.

There you have it. As usual, remember to stay tuned here at MP1st for the complete patch notes once the new updates for CoD Vanguard and Warzone drop tomorrow, May 24, and May 25.