The star of this update, in particular, is the R8 Revolver. The new weapon occupies the Desert Eagle slot and is unique in that it features two different firing modes. In its primary mode, the wielder can fire perfectly accurate shots at the cost of a lengthy trigger pull. Essentially, it means it’ll be slightly delayed as you hold down the trigger button, which is represented in-game by the hammer slowly cocking back before firing. As a secondary function, the user can instead fan the hammer, increasing the rate-of-fire, but at the cost of accuracy. 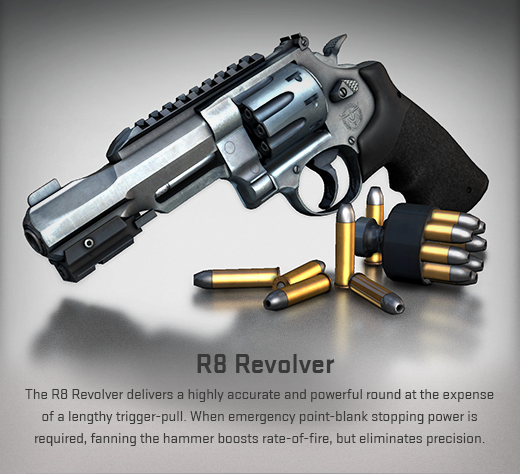 Other Winter Update highlights include the Revolver Case and the Killer Replay, a new feature that lets a player view the moment leading up to his or her death through the eyes of his or her killer. It’s only available in Demolition and Casual modes. Check it out:

In addition, the update has added the ability to vote for a 60-second timeout in between Competitive matches. Round and C4 timers are now 1:55 and 0:40, respectively, which are the new settings that will also be used in all CS:GO Major Championships.

Some weapon balancing tweaks are also present. The movement inaccuracy for all pistols, excluding the R8 Revolver, has been increased, and the recovery time for the AK47, M4A4, and M4A1-S has also been adjusted to “reduce the range at which spraying is preferable to tapping/bursting.”

There’s a lot more, including a few Holiday-related surprises like new gifts that can be purchased for other players. You’ll find the full list of patch notes on Counter-Strike’s Official Blog.

Had a chance to try out the new revolver? How are you liking it so far?