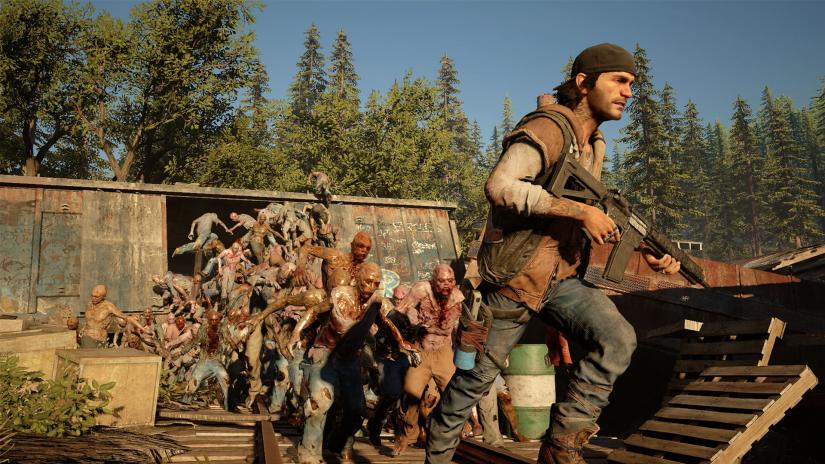 The world has changed. No longer populated by normal humans, but instead creatures. Freakers people call them. They’re vicious, vile, full of rage and move in numbers. These are not the typical zombies we’ve come to expect. These are living, mutated people. They eat, they sleep, and they feed on anything and everything. They have no fear and they attack anything living. The world has forever been change by this mutation outbreak. This is Days Gone and the story of Deacon St John. 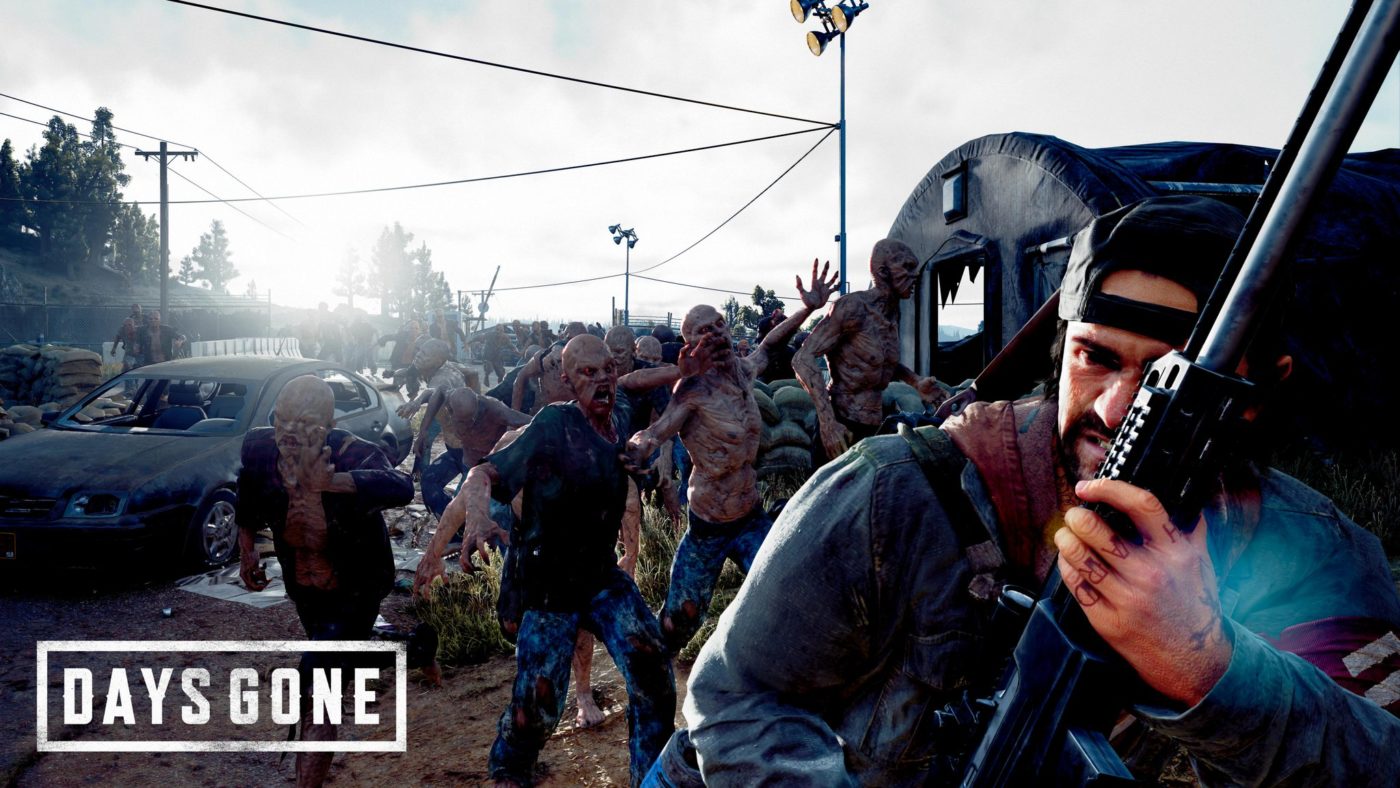 In Bend Studios’ new IP, the earth has been seemingly ravaged by some sort of infection. One that is changing and mutating people into something far worse.  Here, Deacon St John is the main character who gamers will play as as he explores the beautiful and dangerous Oregon. While settling on a mission to escape north with his best friend Boozer, trouble arises. Before this biker duo can leave, Boozer is hurt and the plans get altered. This eventually leads Deacon to whole new plot of discovering just how the infection came to be, what happened to his missing wife, and features lots of twists and turns in the story.

That said, Days Gone is filled to the brim with lots of revealing plot elements. Cinematics that showcase some fantastic acting from the likes of Sam Witwer and the rest of the cast. With cutscenes that showcase both the current timeline and the past. This does a great job of filling in the backstory with Deacon and his wife Sarah, even if the first hours feel a little rough in presentation. Meanwhile during the present time, details showcasing Deacon as a man with issues, but one that struggles and hasn’t left all his humanity in the past. He lives to survive in a world that wants him and others dead. Yet he still finds a way to help those in need. It’s great to see Deacon evolve as a character through the 35+ hour campaign. Instead of growing tired of the plot or development, I only continued to find myself lost in Deacons tale. 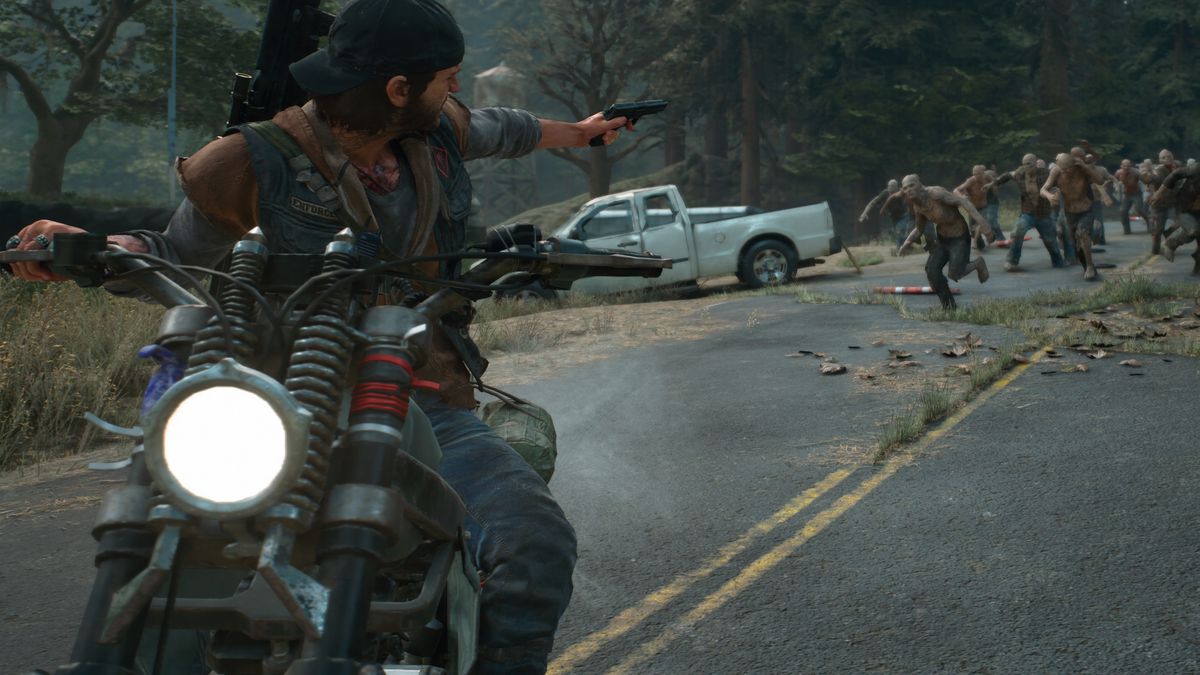 An enthralling story or characters can help push a narrative players love to experience but the gameplay has to hook them in.  Days Gone, in essence, is a typical open world game. Featuring a huge map, main missions, side quests, and random events peppered throughout the map.  Anyone familiar with the open world genre will feel right at home. Meanwhile anyone that has potentially burned out on this style, might feel a pang of déjà vu. Days Gone doesn’t exactly re-invent the wheel, but it does provide quite a few interest elements to make it stick out from the rest.

Days Gone provides a good mixture of action, exploration, stealth, and tasks Deacon will perform. From protecting innocent people, scrounging for supplies, and to taking out a camps of marauders. There are plenty of variations, even with some of these elements repeating over time, which is to be expected in these types of open world affairs. Overall, there tends to feel like a fine balance between all these elements but that is also up to player’s discretion on how they want to proceed.

Combat is engaging and exciting if not a bit loose feeling. Perhaps even feeling a bit unfair at the start. While combat does seem typical to other third-person games with cover and “slow down” aiming mechanics, the crafting on the fly is reminiscent of something like The Last of Us. Deacon will constantly need to raid old buildings and vehicles in order to craft things like Molotov cocktails, pipe bombs, or critical lifesaving medicine. As Deacon continues to fight and complete missions, he will gain experience and skill points as he levels up. These points get dumped into three different tree categories, ranged, melee, and survival. This is where combat really starts to improve and with better weapons, Deacon becomes a killing machine of sorts as he attacks and sneaks his way through the world. As players once felt weak, they will continue to get stronger, able to tackle more of the dangers that come at them. The most impressive thing being the horde though. Massive groups of 100+ freakers that will herd together destroying anything in their way. Alarming these groups will lead to many dangerous moments of running to survive, at least until Deacon can build himself up to fight back. These moments provide some of the best engaging, thrilling, and terrifying moments of survival in the game and will be remembered as one of its most striking features. 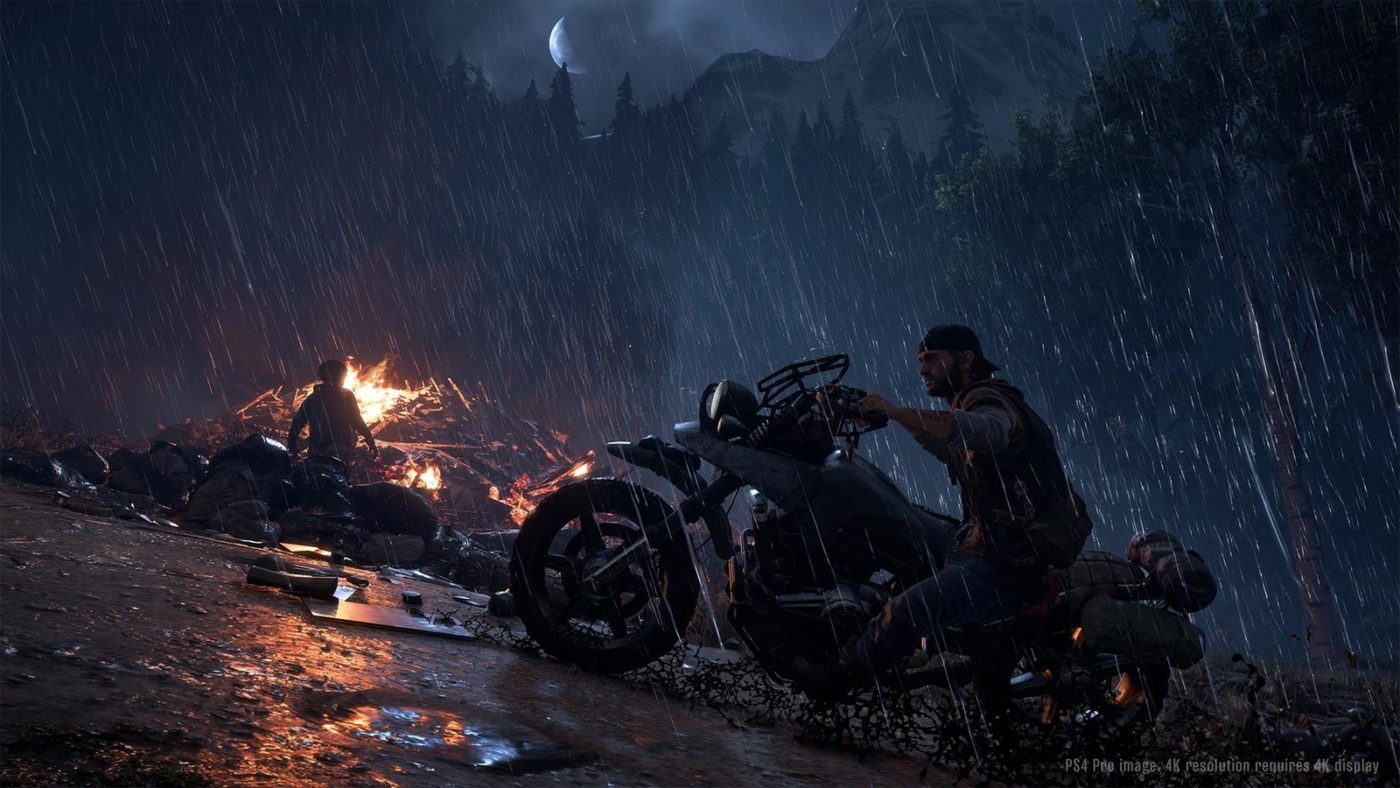 While there will be plenty of exploration on foot, another unique aspect to Days Gone is the motorcycle. While some might see it as just a machine, the player will bond with this much like the horse in Red Dead Redemption 2. Deacon needs to take care of his bike, repairing it with scrap when it gets damaged. He also needs to ensure he has gas to enable both driving around and fast travel. Finding gas is never that hard in Days Gone but running out can lead to some of the most dynamic moments of unscripted gameplay. Upgrading the bike, just like Deacon, enables better controls, handling, and gas consumption. In another unique spin, players have to be near their bike in order to save the game. The bike becomes a secondary character to the player even if it doesn’t seem so obvious at first. Riding around the Oregon setting is both exciting and enthralling, with handling that eventually reminded me of playing Excite Bike of all things.

Visually, Days Gone is mostly a stunner and a positive one with the highlights being the world that Sony Bend Studio has crafted here. From lush forests, dark caverns, abandoned towns, creepy mines, and the beautiful skies. This alone will keep many folks indulging in exploring the world. It doesn’t hurt that the game feature a robust photo mode which will make virtual photography players very happy. Deacon looks fantastic as well, retaining Sam Witwers charming looks but with a more rugged biker style, of course. While other characters look similarly good, some obviously didn’t get the care Deacon did, which is a bit understandable. Meanwhile the creature’s players will run into look scary, gross, and terrifying at times. Days Gone not only features human freakers but wild animals such as bears, wolves, cougars and crows that have been infected also. This also goes hand in hand with the audio design, which sees some fantastic sound effects with guns, animals, and ambient audio in the world. Meanwhile most of the characters and cast bring the story and world to life in the mostly believable way. This is all rounded off with a wonderful score composed by Nathan Whitehead that delivers both exciting and emotional cords, that even now has me listening to it outside of when playing the game. 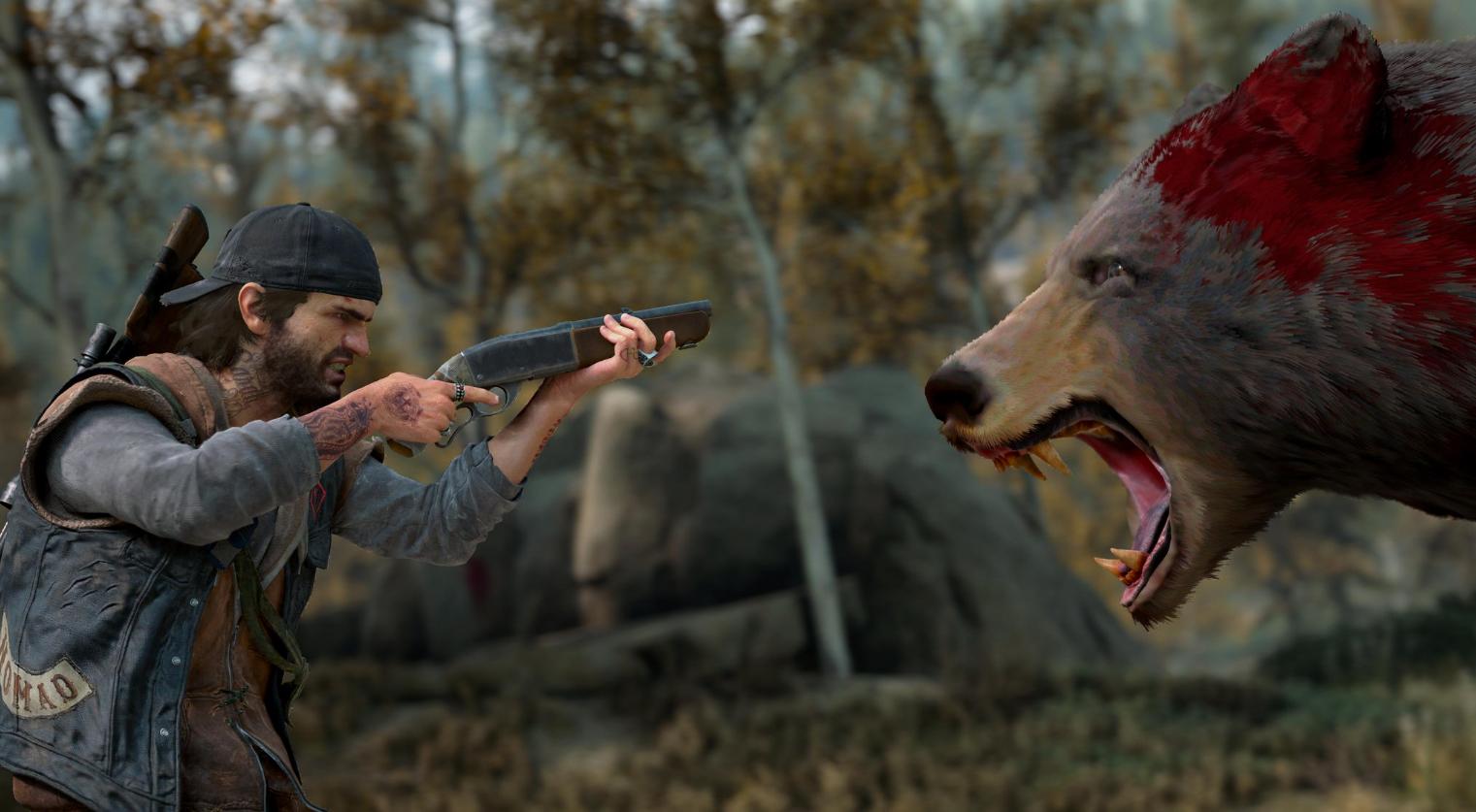 It’s no surprise that I’ve come away from Days Gone loving it as much as I do, being a long time zombie apocalypse fan. That’s not to say that I walked away from it completely happy. There are a few things I found could have been smoothed out a bit more. For example, Deacon St John doesn’t slide down ladders. A minor complaint but when almost every other video game protagonist does this nowadays, it was a weird omission. Other little oddities don’t stop there. Another great example is Deacons flashlight, it simple doesn’t exist on his character model yet players will be using the light often. While there are plenty of great missions throughout the campaign, there are a few that are as simple as going to a character, seeing a short scene and that’s it — mission done.  I can only question why some of these design decisions were chosen but they are minor. Also the AI, which is mostly competent, at times it just seems to go a bit brain dead. Being able to easily walk behind someone in plain view. Also animals that can sometimes get stuck or be extremely no engaging while you blast them away. These felt a lot more sporadic.

The bigger concerns are system performance and some oddities in cutscene delivery. Days Gone isn’t the most polished game. It has framerate stutters mostly when driving around the map and occasionally in camps or during loading. Missions will bug out at times, requiring a checkpoint restart. I never personally experienced anything game breaking, but the farther into the game I got, the worse the performance was. Also noticeable was the audio de-syncing from some cutscenes. I understand that almost everyone will have a different experience with open world bugs, but Days Gone seems to have them a little bit more than some others. 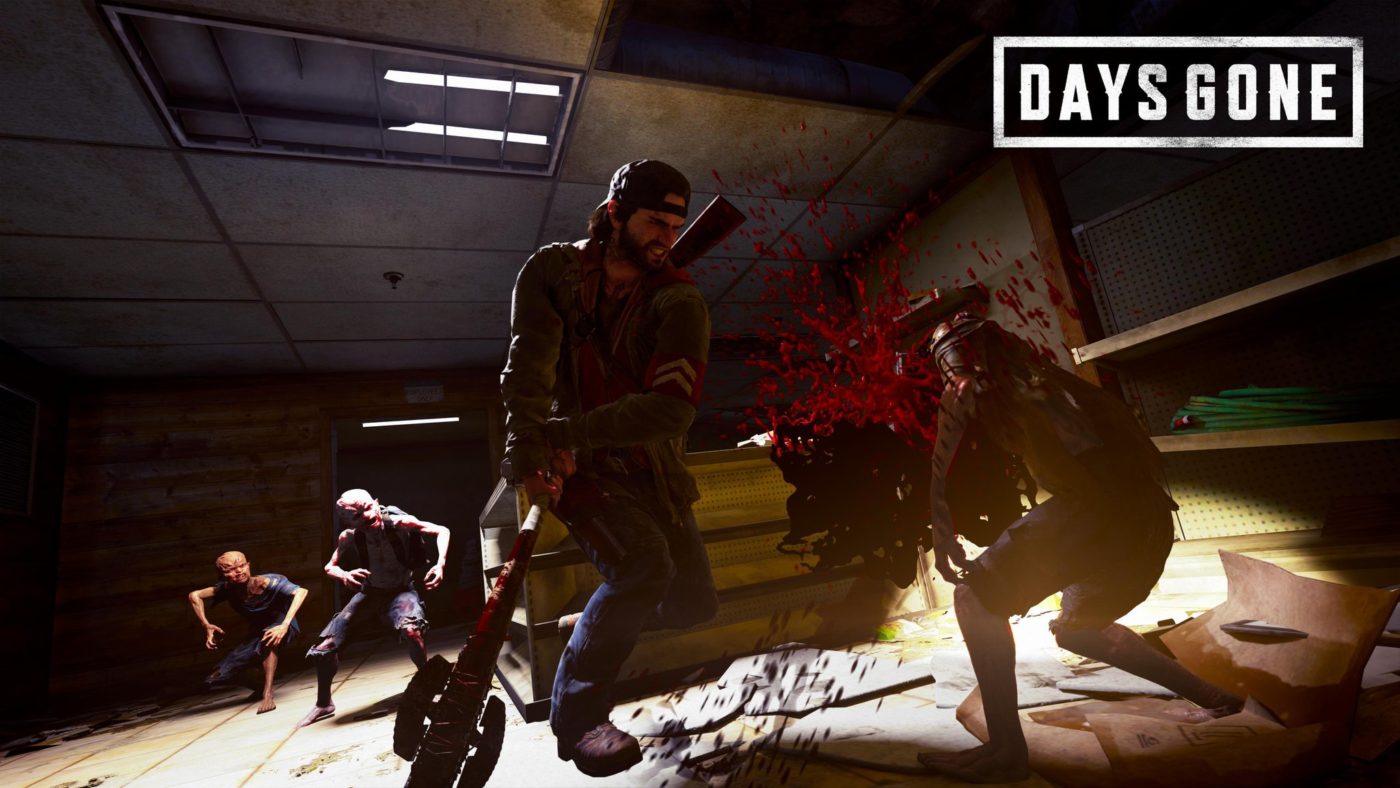 Days Gone review code provided by the publisher. Days Gone played on PS4 Pro, shot many freakers, burned many nests, and spent many bullets on a journey that took 60 plus hours. You can read MP1st’s review and scoring policy right here.