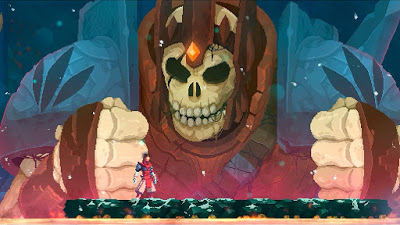 Evil Empire has released the Dead Cells update 1.24 April 22 patch today! This includes a huge list of changes, and fixes, which can be seen below in the patch notes.

Per the PS4’s update history:

– New weapon: the Oven Axe.
– They say the last hit can be chained, but no one lived long enough to confirm…
– New weapon: the Toothpick.
– A big wooden club. Hold to charge and break the club on the head of your unfortunate enemies.
– New weapon: the Tombstone.
– Stay on the ground and doom nearby enemies if you manage to kill something with the last hit.
– An ethereal tombstone fall on the heads of doomed enemies. Each kill starts a new wave of doom (up to 3 consecutive waves).
– New mutation: No Mercy. (Colorless). Instantly kill enemies going under 15% health (non-scaling). Effect halved for bosses.
– New mutation: Point Blank. Close-ranged range attacks inflict X% bonus damages.
– New mutation: Barbed Tips. Inflict x damage per seconds to enemies per arrows stuck in them.
– New difficulty curve: We’re experimenting with a new way of increasing the difficulty from one BC to the next.
– BC0: Health fountains in every transition.
– BC1: Health fountain every other transition, with one minor flask when the fountain is missing.
– BC2: No more health fountain, one minor flask in every transition.
– BC3: One minor flask after the first boss and before the second.
– BC4: No more health in any transition, enemies teleport to your position.
– BC5: No more health, enemies teleport, malaise added.
– Looking to have your opinion on that new formula, so don’t hesitate to give us feedback!
– A new PNJ 5bc exclusive has appeared, the Collector’s intern! He will be able to unlock blueprints while the big guy is away.
– Added an Omnivorous diet which randomize the appearance of your food.
– Legendary items now scale based on the sum of your two highest statistics. Legendary no longer increase the item level. This is very subject to change and hence has no visual indication implemented yet.
– Tesla Coil blueprint drop rate increased.
– Items obtained by the Collector (when completing a blueprint) are now Colorless.
– Malaise no longer increases the movement speed of enemies.
– Sudden Death prevention invulnerability duration increases from 0.5 to 0.6 seconds.
– All weapons now have a bit of air control if an ennemy is in the strike zone.
– Capped the fatal fall’s damages to 15% of your max life.
– Added bonus scrolls in Fractured Shrines (in BC3+) and Undying Shores (in BC4+) to make them on par with other levels.
– Turned one double-scroll into a triple-scroll in Fractured Shrines.
– Improved Soul Shot’s (the off-hand of Ferryman’s Lantern) aim to target multiple enemies if possible.
– You can now find one outfit and one other item as blueprints in a level.
– Mobs can no longer spawn or turn into elites do to Malaise in the first few seconds after an Elite mob aggroes you.
– Fixed Shovel, Flashing Fans and War Spear not working with Porcupack.
– Fixed missing scrolls in Fractured Shrines and Undying Shores.
– Made fatal fall’s zones in Fractured Shrines more tolerant to prevent unfair damages.
– The description and affix list of items now scroll together in the Pause menu for a better readability in all situations. Still not an excuse for really long descriptions of items, but it’s better than nothing.
– Reordered Fatal Fall’s achievements in the Statistics panel to a more logical order.
– Increased the size of the flask zone to account for all items.
– Cocoon now display “Parry” when a succesful parry occur.
– Improved Cold Blooded Guardian animations and visual effects for a better readability.
– Fixed Myopic Crows color in the Statistics panel.
– Malaise rules modification are now denoted by icons when the malaise increase. You can find the meaning of each icon in the Infos tab of your pause menu.
– Improved Serenade’s visual effects for a better readability.
– Improved readability of War Javelin and Snake Fangs teleport visual effects, especially in Fractured Shrines.
– Added a small visualisation of the item in your backpack in the pause menu.
– Added a small mention of the possibility to use Custom Mode to lock back items in the Collector UI to encourage players to unlock everything, even items they might end up not liking. Use the Custom Mode! It’s part of the game! You’re not cheating!
– Backpack mutations (Porcupack, Acrobatipack and Armadillopack) now have their icon showcasing the internal cooldown.
– Removed the confusing “Hold RB to empty your backpack” prompt in the switch item GUI.
– Fixed Acceptance text not mentionning food cursing you.
– Fixed Acrobatipack not mentioning that melee weapons don’t trigger the effect.
– Fixed some typos.
– Cursed Gems now require a long press to be picked up. No more accidental cursing.
– Added the option “Hold to chain attacks” in the Gameplay tab of the options. Serious note here: please suggest more accessibility options. We will do our best to include them.

Once we know of the next one, we’ll let our readers know.