Along with some of the gameplay improvements that were outlined last week, Destiny developer Bungie will be changing up the way you see and hear the game with Update 1.1.2, launching later next month.

Soon, the update will introduce a handful new Settings that will allow you to greatly customize the audio and visual presentation in Destiny, including new color options and volume sliders.

“We’ve put a lot of thought into the best way to answer player feedback when it comes to audio.” Bungie Head of Audio Jay Weinland wrote in the studio’s latest Weekly Update.

“It’s been clear that there are times when you want to elevate the voices of your friends above the mix. Chat Volume is a setting that will let you adjust the players on your team in a range from 50% up to +125%. Game Volume adjusts all in-game dialogue, sounds effects, and music as one cohesive unit in a range from 0% to 100%. Keep in mind that Chat Volume adjusts the chat volume out of your speakers but not out of your chat headset (you should have your own volume for that).” 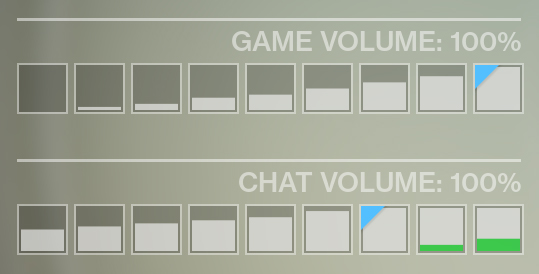 The new update will also allow players to mute Destiny’s soundtrack completely, so you can can kick alien ass to the sound of your own tunes.

“Some players have asked us for the ability to listen to their own music while they play,” Weinland added. “If you want to do that, we’ll try not to take it personally! If you select Muted, the music will be excluded from the mix altogether.”

For those audio nerds out there, Bungie says there’ll also be a little audio Easter egg to find once the new update drops. “It’ll be in there, somewhere,” Weinland wrote. “Once the update is live, see if you can find it…”

Gamers who deal with some form of color blindness will also be happy to see, literally, some of the new color options that will be available in Update 1.1.2.

“You may not have trouble distinguishing the red blips on the motion tracker from the red surface of Mars, for example, but chances are you know someone who does. Our solution for this subset of our community is a proper ‘Colorblind Mode’ for Destiny.”

New Settings will include modes for Deuteranopia, Protanopia, and Tritanopia and will apply to all aspects of Destiny’s visual presentation, including loot drops, ammo drops, enemy shields, and radar. 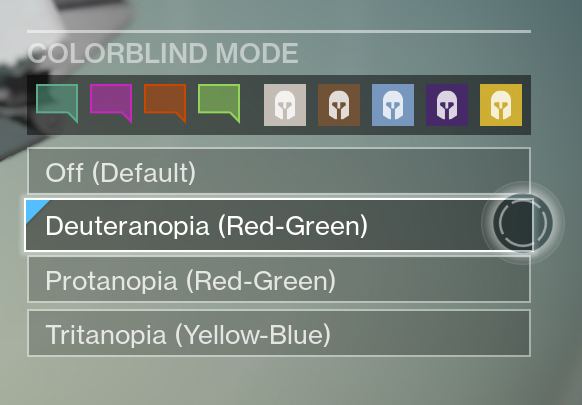 Loot and ammo drops are also getting a size and brightness increase to help with visibility in general, says Candland.