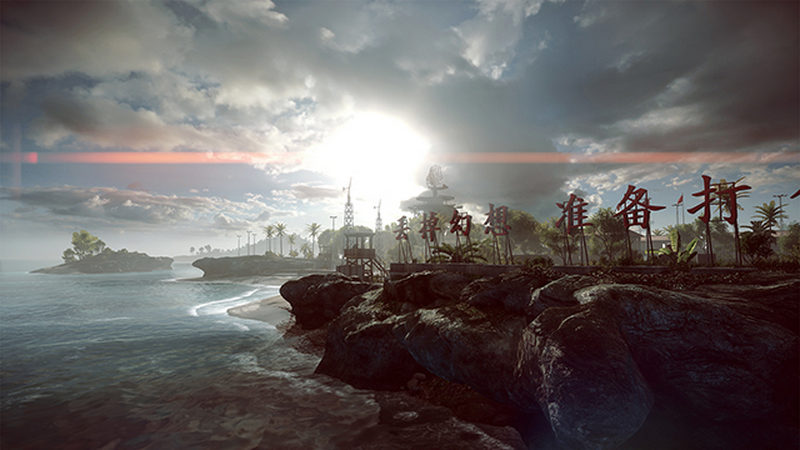 You might find a number of her answers rather intriguing, including what she had to say about night maps and rush-only maps in Battlefield 4. She also touched upon why randomly generated weather and time of day effects were not introduced into the game.

With the addition of infra-red optics in Battlefield 3 and Battlefield 4 like the IRNV and the FLIR, as well as the inclusion of hand flares in Battlefield 4, it begs the question why more maps set in darkness, or during the night, aren’t a part of the game. Reaching nearly 3000 up-votes on the Battlefield 4 sub-Reddit was a popular thread about this very subject. Harrison answers why there currently aren’t many night maps, but also hints that they’re “absolutely something [DICE is] always considering”:

“Good question! In general, we tend to think that night maps look pretty darn cool. You can implement some really neat lighting effects and encourage use of gadgets that generally aren’t used as much, with some really fun results. But there are a few things we considered with creating night maps.

Statistically speaking, most people don’t play night maps – maps set during the day get played more. We know this from tracking the numbers of maps played through on Battlefield 3 and Bad Company 2. Even if the map is really well-designed, players tend to gravitate more towards day-time maps.

Furthermore, players that crouch, take cover and wait forever to shoot someone running by in most maps gets even more common on night maps, where it’s tough to differentiate between objects and people. This has proved to be quite annoying in playtests. It’s possible to balance this – better heat vision, better spotting and so on – but for Battlefield 4 we focused on day-time maps. Future nighttime maps are absolutely something we’re always considering, though.”

To many, some of Battlefield: Bad Company 2’s most memorable maps were specific to game modes like Rush. It was also one of the five reasons why we believe Bad Company 2 was and still is one of the most iconic games of our generation. So, why weren’t Rush-focused maps included in Battlefield 4’s roster, a game mode that many consider to be currently lacking? Harrison answers:

“Rush is a game mode that is really fun to play on many of the Battlefield 4 maps, and it’s also one of our favorite game modes in the Multiplayer team. However, our maps are generally built for Conquest, as this is a game mode that is played by the majority (around 70%) of our players. This means that we always need to make sure that the map is 100% awesome in Conquest first-hand, but that being said, we also work hard to make Rush a good option on every map.”

Lastly, randomly generated weather effects and time of day have always been of high interest to the community. Both are featured to a more limited capacity in Battlefield 4 maps like Paracel Storm and Dawnbreaker, but not to the extent many community members have expressed interest in. Again, Harrison answers why the idea was left out of Battlefield 4:

“Even though each Battlefield game is unscripted in many ways, we wanted the experience to still have an emotional impact and match the adrenaline arc of a normal gameplay round. That way, as more buildings get destroyed, the tickets count down and the gameplay gets more tense, so does the level.”

It might suck to hear that maps catered to the Rush game mode and randomly generated weather and time of day aren’t all that high on DICE’s priority lists, but it will be interesting to hear more of these night maps Harrison alluded to in her answers.

Of the three, what’s most important to you?

5 Things That Made Halo 2 So Iconic