According to the press release, these games will span “all interactive platforms and the most popular game genres, while Disney will retain certain rights to develop new titles within the mobile, social, tablet and online game categories.”

“Every developer dreams of creating games for the Star Wars universe,” said EA Labels President Frank Gibeau. “Three of our top studios will fulfill that dream, crafting epic adventures for Star Wars fans. DICE and Visceral will produce new games, joining the BioWare team which continues to develop for the Star Wars franchise. The new experiences we create may borrow from films, but the games will be entirely original with all new stories and gameplay.”

Yes. Star Wars + DICE, developers of the Battlefield franchise. You read that right. Battlefield: Star Wars, anyone? Of course, there is also the chance that either they or Visceral pick up the cancelled Star Wars: Battlefront III project, which would not be so bad either way.

The fact that these upcoming Star Wars games will span “the most popular game genres” means that we’ll more than likely be seeing a Star Wars FPS/shooter from at least one of these developers. “Oh, the possibilities,” said DICE General Manager Karl-Magnus Troedsson in a recent Tweet.

According to DICE’s Frostbite Technical Editor, the Star Wars games in development at DICE and Visceral will be built on the Frostbite 3 engine, the same engine powering the upcoming Battlefield 4. 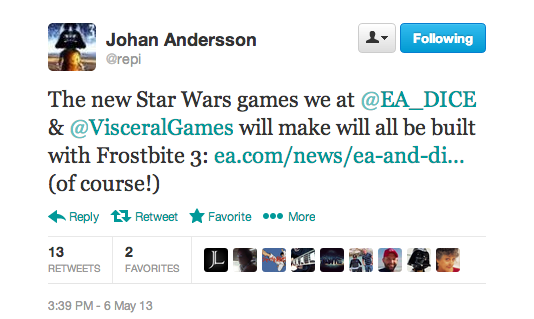 What sort of Star Wars titles would you guys like to see from DICE, Visceral, or BioWare?