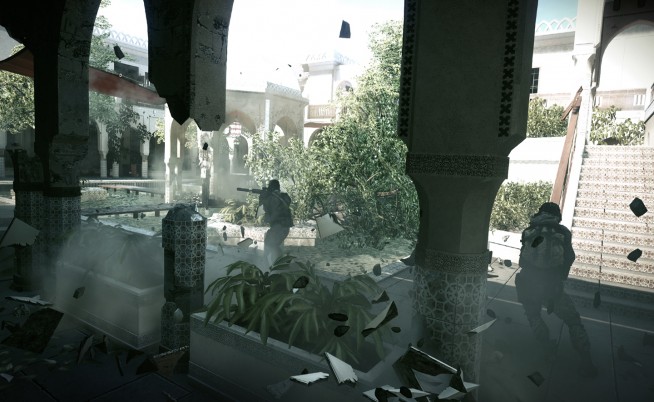 Speaking to VG247, Niklas Fegraeus describes Close Quarters as an “indoor Battlefield.” To check out some gameplay footage for yourself, make sure to take a peek at the second Close Quarters gameplay trailer. As many already know, Close Quarters will introduce 10 new weapons that can be unlocked by completing assignments and which can also be brought back to Back to Karkand and the original Battlefield 3. “When we did the research for what guns to include and so on, we have looked at what kind of weapons and weaponry is most suitable for a close combat, indoor environment. You don’t want big guns that get snagged on thing. There’s a compact feel to a lot of it,” explains Fegraeus. Speaking of weapons, make sure to check out the complete list of weapons included in Close Quarters.

So far, only two maps have been revealed: Ziba Tower and Donya Fortress. Fegraeus describes Ziba Tower as a “luxurious skybar located in central Tehran.” As for Donya fortress, Fegraeus explains that “it’s a bit bigger than the Ziba Tower and it has lots of verticality in it where you can go into the cellar and you can be out in the big water garden. It has some really nice locations.” Both Fegraeus and Bach stressed the importance of vertical gameplay with multiple levels in this particular DLC.

Bach went on to describe the newly introduced game mode, Conquest Domination, as “a twist on the classic Conquest mode where you have only three flags. You can’t spawn on the actual flags so it’s a very high-paced version of Conquest that fits these types of environments really, really well.” Bach also promises that “there’s room for all the classes in these type of maps.”

Speaking of the thirdm upcoming expansion pack, Armored Kill, Bach describes it as being on the opposite end of the spectrum. On top strategic gameplay, it also promises to include “big, open landscapes, new vehicles – a lot of vehicles – and focusing on the width and the scale of Battlefield.” It goes without saying that Bach couldn’t go into details regarding exactly what vehicles we will be seeing in Armored Kill, but he did promise a nice “spread in the vehicles,” when referring to selection.

Bach wrapped things up with a summary of DICE’s current plans for Battlefield 3: “So the expansion pack called Close Quarters is due to be released in June, and then in fall we’re releaseing the next one, Armored Kill, and then Winter is the only thing I can tell about End Game.” Battlefield 3 fans can expect a long shelf life as Bach explained at last week’s EA European Showcase, “we at DICE, we only focus on Battlefield. We make sure that if you’re a Battlefield player, there should be plenty of Battlefield for you to spend your days on. And again, we are focusing on giving you 12-18 months of value for Battlefield 3 and the expansion packs we’re releasing.”

When asked if End Game would mean the end Battlefield 3, Bach answered with a grin, “I will not answer that question.”

Which Battlefield 3 expansion pack are you most looking forward to?