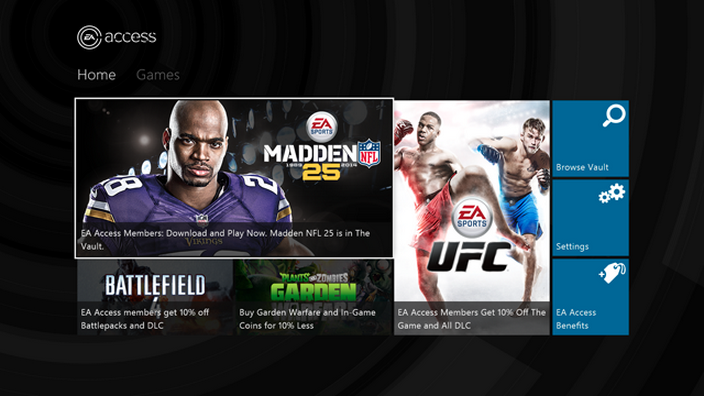 COO Peter Moore has said that “I think one of the key things is that once a game goes into the Vault it stays there, it’s not going to be taken out, that’s a commitment we’ve made,”. With that said, the TOS still states that they reserve the right to take games out.

Electronic Arts, publisher behind franchises like Battlefield, Madden, Dragon Age, Mass Effect, and more, has announced a new subscription service exclusively for Microsoft’s Xbox One that allows subscribers to play games in their fullest for only $5 a month.

“The Vault” as EA calls it, is a collection of their latest titles that allow subscribers to download and play in their fullest and for an unlimited amount of time. The catch is, for those wondering, is that titles in the vault aren’t there forever, and some games might not even be included. With that said, EA has not come out and stated how long each title will be in the vault for.

Along with those features, subscribers will also receive a 10% discount on full game downloads and subscription services offered on the Microsoft store, and will be able to demo new games before they are released up to 5 days.

If this deal sounds good to you, go ahead and visit the Xbox Live Store to purchase a month pass for $5 or an annual pass for just $30. You’ll get access to 4 games for the beta, which are Battlefield 4, Peggle 2, FIFA 14, and Madden NFL 25.

Our Take – While it does seem like a pretty good deal, and I’m absolutely stunned at the value EA is giving gamers, I, and many others, expect the price to hike up soon. Regardless of where it might go, I hope the subscription fee will continue to feel like a steal for the service.

What are your thoughts? Are you happy with what the service provides, or do you feel that some trickery is afoot?