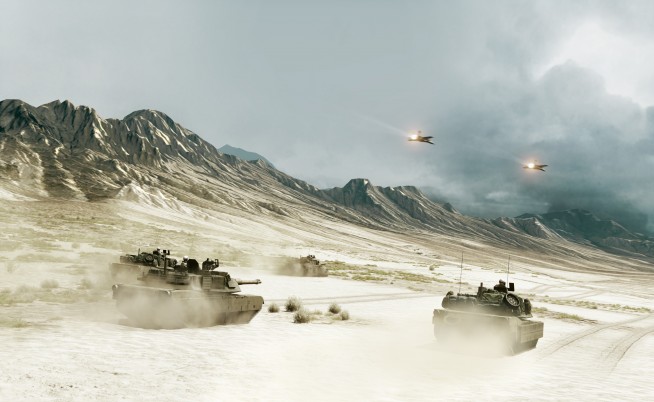 Electronic Arts has set their sights on reclaiming the first-person shooter throne for a while now – two and half years, to be exact. And COO, Peter Moore, predicts that within the same amount of time, EA will, indeed, own the genre based on their original 5-year plan to make it to the top.

Speaking at an Electronic Arts Information Session at the University of British Columbia, Moore expressed EA’s continuing desire to overtake the shooter genre by the year 2014, specifically referencing the Call of Duty franchise, according to our sources. Moore explained that EA plans on doing so by means of their star shooter franchise, Battlefield, as well as the technology backing it up. With the power of game engines like Frostbite 2 and their A.N.T technology, EA is banking on their research in these technologies to become a large part of their success.

While it may seem obvious, this implies another major release in the Battlefield franchise by next year, or soon, if EA really wants to kick things into gear. While it is unlikely that gamers will be seeing a direct sequel to Battlefield 3 any time soon, the same can’t be said for a sequel to Digital Illusion CE’s popular spin-off series, Battlefield: Bad Company.

Making the scenario of a sequel to 2010’s Battlefield; Bad Company 2 all the more likely is a statement made by an EA spokesperson regarding the Bad Company series: “Obviously no announcements to make on this, but we see Battlefield Bad Company as a very viable component of the Battlefield universe moving forward.”

Though a follow up to 2010’s Medal of Honor was revealed last week, titled, Medal of Honor: Warfighter, and is set for release this October, EA still wants to keep Battlefield 3 relevant. Moore also specifically mentioned his admiration for Activisions subscription-based service, Call of Duty: Elite. He added, “Certainly we’ve got a digital content flow yet to be announced on that. We will look at different business models that will make a good value for the consumer.”

Call of Duty has obviously seen mass success in the recent years, especially on the consoles, platforms that recent entries to the series was obviously tailored to. This is not surprising seeing its extremely wide user base compared to that of the PC. It could be said that this was one of the main motivations for the Bad Company series in the first place – a shooter aimed at the console audience. Keeping this in mind, and given Bad Company 2′s more “focused” approach to first-person shooters when compared to Battlefield‘s more “sandbox” play style, it is likely that EA will be relying heavily on the appeal of Battlefield: Bad Company 3. If EA really wants to take the cake on this one and hit Call of Duty where it hurts, their going to have to win the console audience over, and audience currently dominated by Activision’s Call of Duty franchise. The release of Bad Company 3 could do wonders to aid EA in its goal.

Also lending to this theory is the confirmation that DICE will not be developing multiplayer for Medal of Honor: Warfighter this year, giving them a head start in producing their next title. And, as we all know, it’s been made known that a number of DICE employees have left work on Battlefield 3 to focus their attention elsewhere.

Of course, we should not forget that Respawn Entertainment, who are now also under the EA umbrella, are set to release their debut FPS in 2013. In this case, perhaps EA would not want to push out two AAA FPS games in the same year, meaning a 2014 release of BFBC3 might make more sense. The question is, will EA save the next Bad Company sequel as the final blow to the heavyweight that is Call of Duty? Either way, the next couple of years are shaping up to be an exciting time for the FPS genre.

We want to hear your thoughts. What year do you think we’ll be seeing Battlefield: Bad Company 3 and will it be the real “CoD killer”? Do you think EA has what it takes to overtake the Call of Duty franchise or do you even care? Let us know in the comments below!

Everything You Need to Know About Call of Duty Elite: Clan Operations