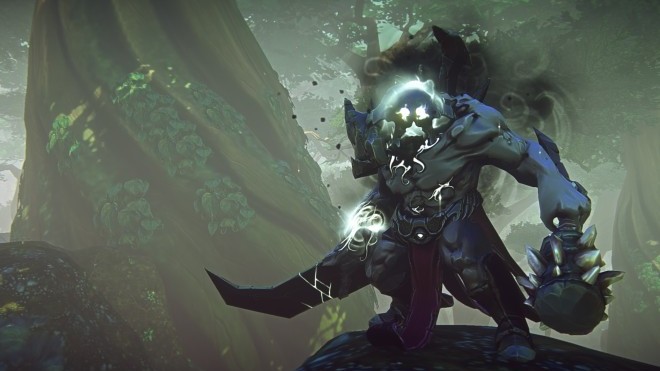 Sony Online Entertainment is bringing back EverQuest in a big way.

“EverQuest is another point in the triangle,” he recently told IGN. “We’re creating a triangle; it’s not just a line anymore.”

EverQuest Next will take some bold steps in a new direction. It will introduce destructible environments, procedurally-generated quests stemming from independent monster behavior, and a totally revamped crafting system. As IGN author Kay Bailey put it, “In essence, it’s a game where players shape the world together, a sort of massively multiplayer Minecraft with elves, crafting, monsters, and all of the other trappings of a fantasy RPG.”

That sounds really cool to us.

Players will be able to create their own unique experiences within the game by building up and destroying buildings and structures, eventually making every sever in the game a completely different world from the next. Of course, there will be some degree of control, but it sounds like SOE is really giving players a chance to play how they want. Even enemies will also do what they please, as each enemy type has different preferences as to what it is they might be after. Orcs, for example, love gold and will attack locations – like developing cities – where gold is plentiful. Quests are seemingly being replaced by “rally calls”, which act as dynamic events involving any number of players.

Georgeson hopes that this will lead to players developing “a long, detailed history of their character so that when they tell others that story, they actually care, as opposed to, ‘Yeah, yeah, I did that quest.'”

He went on to say that “what we need to deliver with EverQuest Next is something really original, so what we did was tear it down to the bedrock. We pick what we liked, what we didn’t like, and we came up with a list of holy grails that we as designers had always wanted to do, but never had the time or the intestinal fortitude to try before.”

“It’s intimidating, but we’ve been breaking these things down into categories and attacking them one at a time, so that we can polish up what needs polishing before moving on,” he continued. “We’ve also prioritized all of our heaviest risks at the earliest stage to prove that we can get them done. Now we’re past all of the R&D hurtles, and we’re at the point where we’re doing what we know how to do, which is build an MMORPG.”

Elements which have defined the series like crafting will return as well, including some previously featured locations.

EverQuest Next has been in development for over four years now and hopes to fulfill some lofty expectations, hopefully regaining it’s title as the king of MMORPGs. To help move things along, SOE is even employing the help of fans by releasing their internal toolset to the public. They’ll be able to create their own landmarks and could eventually make it into the game.

Check out some of the brand new videos below, courtesy of IGN, and be sure to tell us in the comments what you think! Does EverQuest Next have to potential to finally de-throne World of Warcraft?

Dig Out of Trouble