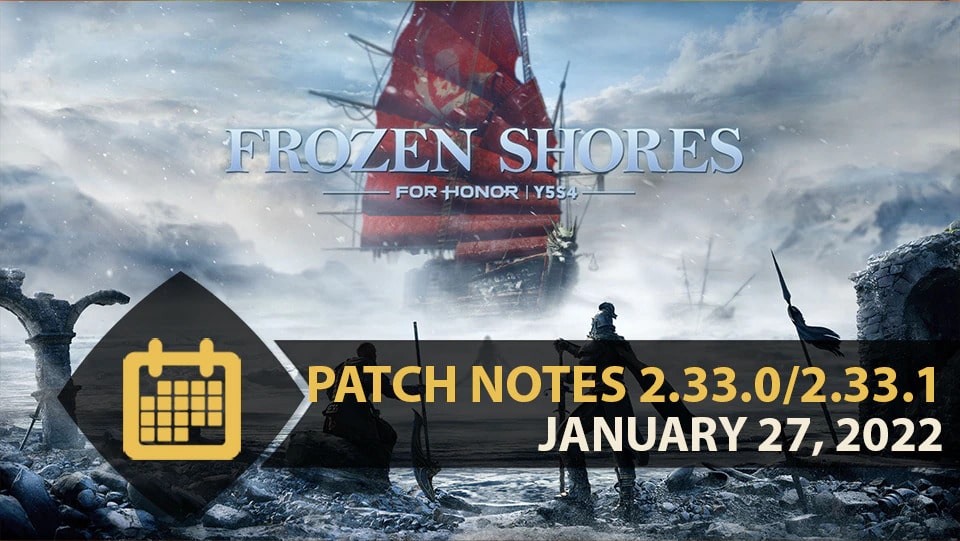 Ubisoft has released the For Honor update 2.33 title update, which is also called the Frozen Shores Y5S4 version 2.33.1 patch! This includes a new fighter, balance changes and more! Read on for the For Honor January 27 patch notes.

Note that this title update seems to combine two patches into one, so don’t get confused with the changes and version numbers.

Developer’s comment: Now that we’ve had Shinobi go from Testing Grounds into Live, we now make a number of nerfs to Shinobi here based on its over-performance.

Firstly, we make the Front/Side Dodge Kick punishable on Miss.

Secondly, we reduce the window of opportunity to enter Back Flip so that Shinobi is not able to notice the opponent’s action and actively react in time to Back Flip when necessary.

Thirdly, we nerf the Stamina costs of certain moves to make Shinobis slow down their combat output, and introduce moments where they need to consider if they really want to spend the stamina.

Finally, we nerf Shooting Stars so that Shinobi’s aren’t comboing it into Front Dodge Kick.

The Pirates have developed a fighting style that is all their own by engaging with enemies from across the seas. Armed with their razor-sharp cutlass and one-of-a-kind pistol, they engage their opponents with a rush down style that can be relentless. They apply continuous pressure by mixing Pistol Blast and Heavy Attacks that Chain one after the other.

Developer’s comment: to improve input comfort, Feats now use the input buffer to hold your input for 300ms. This applies globally to all heroes.

Note that this does not mean you can use your Feat anytime, it just means that you don’t have to be out of your Recovery before pressing the Feat input – you can press it a bit early, and the system will hold this input until such a time as your character is allowed to launch the Feat, and do so. It should just make things a bit more comfortable.

Developer’s comment: Material color would not look quite right when applied on colored surfaces such as wood or leather. The coloration of chosen material would offset depending on the color of the surface it was being applied to. New material system mutes the surface colors before applying material coloration, significantly boosting color accuracy. Accurate color control also leads to possibility of new, more subtle material colors.