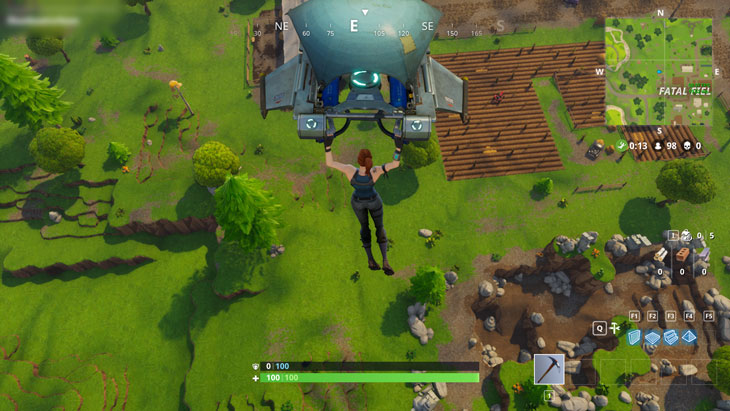 It’s been a hectic few weeks for Epic Games and its game, Fortnite. Not only did PlayerUnknown’s Battlegrounds developer Bluehole take offense at Epic’s Fortnite Battle Royale, but there’s also a Horde mode coming to he shooter-building game as well. However, Epic is sure to be jumping for joy as Fortnite has now passed seven million players!

Yep, just a week out form announcing that over a million players have combated in Fortnite Battle Royale, the Fortnite player count is now over seven million-player strong! This was announced by the official Fortnite Twitter account which also mentioned that Duos and Supply Drops are coming to Fortnite Battle Royale.

Thanks to over 7 million of you who have played Fortnite! We want to keep the Battle Bus flying, so Duos and Supply Drops are available NOW. pic.twitter.com/sRx767u4aG

Additionally, the studio has announced Duos and Supply Drops over on the official Epic Games website, which you can read about below.

DUOS
Duos will release in most regions with this release. We want to make sure that adding a new playlist doesn’t make the experience less enjoyable so stay tuned for more updates on the status of Duos in your region.

Bring a friend and let the duos begin!

SUPPLY DROPS
Supply Drops are back! ! We tried once, but couldn’t quite stick the landing. We fixed those issues and we’re excited for them to return.

Supply Drops are more likely to contain rare weapons and items that you want in a pinch. They’re also a hot zone for attention, so planning how to grab one is important. Watch the skies for those supplies.

The dev team also touched on weapon accuracy, and have come to the conclusion that pistols should not be able to “snipe” at long range, and weapon variety should encourage engagements not make everyone camp like their life depended on it.

We did some iterations with aggressive fall-off damage (as a lot of you have already suggested). There were three main concerns we had with this model:

As a result, we set a couple key goals with our combat:

This meant using accuracy as a mechanic to force closer engagement distances. In most cases, this had the desired result: weapons very neatly grouped into different ranges.

After looking at this info, we quickly realized that a Scoped Assault Rifle and a longer range SMG were required to round out our base weapon lineup, which we added in the update on 9/26.

So, what are we doing going forward? There’s a few additional approaches:

Based on what I played of Fortnite Battle Royale, weapon tweaking is definitely a step in the right direction. Are you surprised at how many people the game has managed to capture so far? Or is it Bluehole’s fault for not releasing PUBG sooner on consoles?