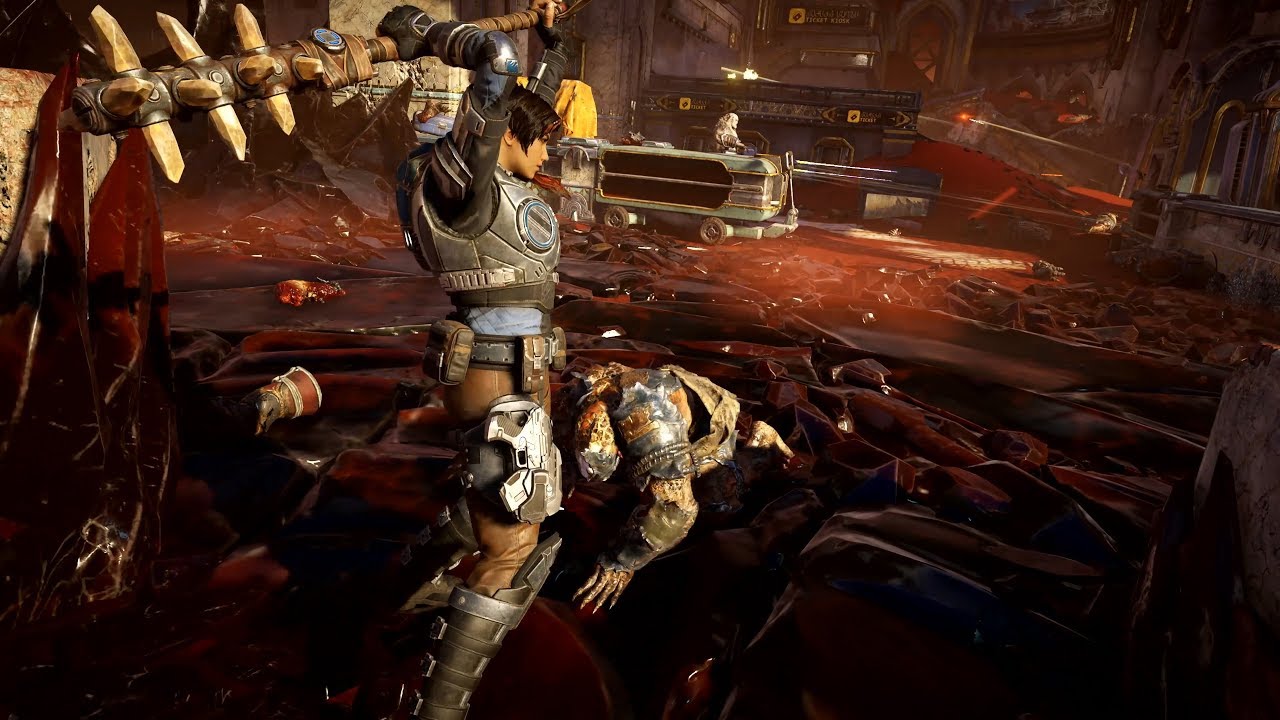 In the latest trailer for the game, the Gears 5 launch maps for multiplayer have been revealed by The Coalition. The maps each offer a unique gameplay style for players to master, or make work for them as they crush enemies with their proven tactics. Check out the trailer below and read on for more information.

Asylum is a gothic nighttime map that has a train cutting straight across it. This divides the map into three unique lanes. The map is filled with beautiful architecture, and unnerving interiors such as beds where patients have been strapped down in order for doctors to perform experiments on them.

Bunker is the largest versus arena style map, and is set in an old Pendulum Wars base. An old munition loading conveyor can be controlled by manning the battlements above, and taking down enemies from behind some fairly decent cover. It looks like there are several buildings that players can hold up in should they be caught out by the enemy squad.

District is a glitzy entertainment area of a brand new COG settlement, and it’s just the place for all out warfare. A cinema has the perfectly placed cover to provide intense duels, while a Juice Bar and Visitor Centre divide the map in two, with each one operating as a control point for one or both teams.

What makes Exhibit individual is that it’s the first asymmetrical map in Gears 5. Exhibit is set in the halls of a new COG museum, filled with specimens from throughout the Gears of War series that will make your skin crawl. The top lane’s exhibits have pressure controlled lasers that will be set off should players act carelessly, and if they ignore the lasers they’ll die a quick and painful death.

Icebound is an outsider trading post that was build on the shores of a frozen lake, on the skeleton of a Riftworm. That doesn’t sound like a great place to do business if you ask me. The map has an elemental factor to it, the ice beneath player’s feed. Should players shoot the ice, it will create a pool or freezing water. Any players who run through this ice water will slowly freeze, and take damage over time until they perish.

Training Grounds is a DB Industries testing facility used to improve the robot army of COG. High points such as the tower and ramparts offer perfect rifle positions that overlook the winding low maze of defences that make up the lower section of the facility. This is almost certainly a map where a player will always be visible, and require the best teamwork in order to conquer.

Vasgar is a dilapidated airport, and the second asymmetrical map in Gears 5. Two strong defence positions on each side look to make this a map where teams battle over single points for minutes at a time, with neither side losing lives quickly. An area of cover offers a chance to flank enemies, but is easily defended. The sandglass centre however, is completely open, but offers a straight run at the enemy team’s position.

The Hive is an Escape mode map that was first shown at E3 2019. Here players will escape from the depths of a Swarm hive, fighting countless Swarm enemies along the way.

The Descent is a three act Hive that players must fight their way down in to begin with, reaching the caves on the third level. From there they need to fight their way back up, competing with an ever-growing horde of Swarm along the way.

The Gauntlet is a one act Hive with three epic fights. Each fight the players work though will be made all the more terrifying with a huge enemy at their backs, Venom.

In addition to the eleven maps that Gears 5 will launch with, players can build custom maps using the map builder, boasting over fifty tiles for players to create with. In the future, players will be able to share their maps with everyone in the Gears 5 community, and compete in hectic matches set within those user-generated maps.