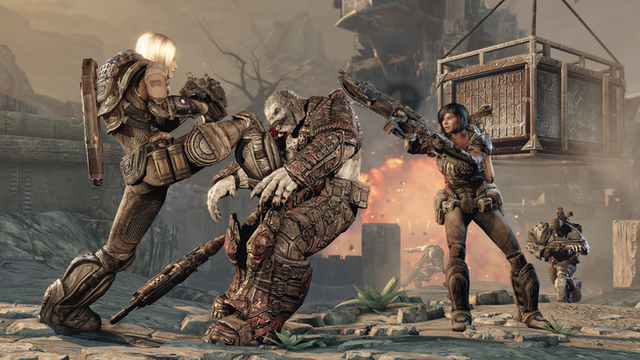 Here’s the most WTF-type video game news of the day: apparently, Epic Games had a working Gears of War 3 PS3 build running way back in 2011! Yes, the Xbox exclusive once was developed by Epic Games for Microsoft’s Xbox 360 rival, the PS3!

UPDATE: Epic Games has confirmed with Kotaku the legitimacy of the build, although states that it was never actually intended for any actually PS3 product.

UPDATE: Epic tells me build was made by them; wasn’t part of any plan to bring game to PS3: “This footage is a byproduct of Epic’s internal Unreal Engine 3 testing process, which utilized both Gears and Unreal Tournament, and was never part of any actual product work for PS3.” https://t.co/N30aXrGQAW

Watch the full eight-hour playthrough of the Gears of War 3 PS3 build below — bugs and all.

According to the uploader named Proto, this is running on a PS3 devkit and is the “real deal.”

It’s the real deal. This is an Epic-made build of Gears of War 3 for PS3. This build is dated May 19 2011, and is the only build of this ever located. As far as I know I’m also the only person with a working build of this particular data as well. I don’t know why it exists, I dont know why it was made. All I can do is speculate.
This is distinctly different from the January 2011 build, as that build was rebuilt from source by an unknown party. As a result, theres 2 builds on PS3, one being unofficial (Jan 2011), the other being this one (May 19 2011). There’s a lot of differences from final, as well as a lot of changes from the January data, but I’ll skip over them for now.

Important notes
It’s currently running on a PS3 Devkit. These have additional RAM that is available and without it you cannot play this.
RPCS3 is not fully able to play this either, but small parts can be loaded under specific conditions.
Splitscreen works, as does multiplayer with the right commands.
Network play is not available as far as I know, as it cannot connect to Xbox Live, nor can it connect to PSN. If it’s able to connect with other systems, I cant test it.
Buttons still show Xbox 360 buttons, as well as tries to read storage like the Xbox 360, but if you select a profile it will softlock the system.
I’m keeping the fix for the data private.
No I wont share it.

How well does it run?
Performance wise, better than the unofficial build remade from source, but not free from flaws. Anya is the biggest performance loss during all of this due to her hair.
Control wise, it has the same issues as the unofficial build. Fully horizontal and vertical aiming movement is quite poor, so you must include slight offsets to your aiming, which in turn makes actually shooting things really difficult.
For levels playable, everything is playable outside of 2 specific cases. Convoy (Act 3 Chapter 3) is unplayable due to an unavoidable RSX exception. Normally you could skip this by loading a specific checkpoint, but the checkpoint system is broken. In turn this leaves it impossible to play the level. The other level is the finale, where the boss gets stuck on a scripting issue. It leaves the level impossible to finish, but is almost complete.

For those unaware, Epic Games sold the Gears of War license to Microsoft back in 2014 for an undisclosed sum, and the rest, as they say, is history.

We’re trying to learn more info about this Gears of War 3 PS3 build and will post more news as we come by it.