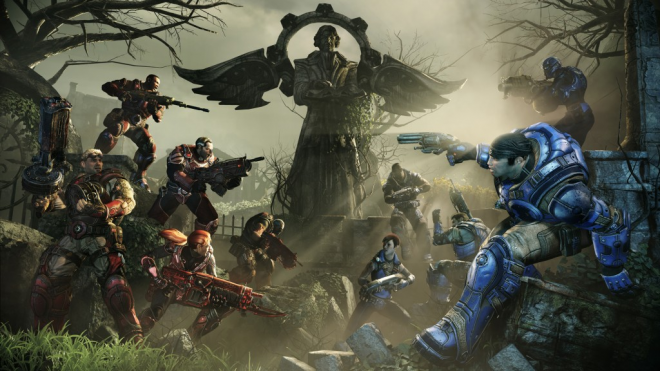 Gears fans can look forward to even more Gears in the very near future.

Microsoft has announced a second set of DLC to hit Gears of War: Judgment that will be available on the Xbox Live Marketplace April 23 for VIP pass holders at zero dollars, and April 30 for everyone else at the price of 1,000 MS Points ($12.50).

The Call to Arms Map Pack will feature three new multiplayer maps and a brand new game mode, as well as more skins and achievements.

Terminal takes place in the train terminal of Halvo Bay, Blood Drive will have you fighting inside a hospital at Halvo Memorial, while Boneyard takes the fight to a burial site, a resting place of the fallen soldiers of the Locust war.

Call to Arms, Epic and People Can Fly’s take on the classic “Arms Race” game mode, will have you working your way up through tiers of weapons as you try to score a kill with each one – 20 in total.

Lastly, players will be able to experiment with six new armor and gun skins as well as earn 10 new achievements worth a total Gamerscore of 250.

Check out these screens below of the Call to Arms Map Pack:

Xbox Live Gold is Free This Weekend in the US, Canada, Latin America and Japan

Activision Promises a Call of Duty Experience Beyond the TV or PC, Unique to Mobile